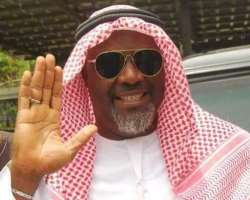 I have just been arrested at the international wing of the Nnamdi Azikiwe airport on my way to Morocco for an official engagement sponsored by the Federal Govt after checking in, Dino Said on his twitter page Monday.

Melaye said he had a brawl with officers trying to seize his traveling documents before being cycled by a band of police officers.

“I was disembarked and asked me to go to their office (at the airport). They snatched my passport but I snatched my thing back from them. I got it back! I’m still here with them. They circled me and said they were waiting for further instructions from the police.”

“No retreat no surrender. Talk we must, he said.

The lawmaker was declared wanted alongside Mohammed Audu, son of a former governor of the state, Abubakar Audu.

Police said the duo was placed on Interpol watch list for allegedly providing false information to the police in relation to an alleged attempt on Mr. Melaye’s life last year.

Senator Melaye has alleged attempt by the police to hurt him in letters written to the US and British embassy and cited by this newspaper.