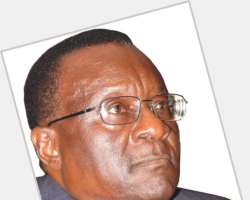 When providence would have it that I would meet with Human Rights Activist, Chief Gani Fawehinmi, It was not his hands I was shaking nor his bossom I was hugging, He was six years dead before I know anything about him & another two years before I read any documentary of him. It was a relic of him engraved in an archive, in the sands of time that I had gotten hold of.

Some times like this last year, I have headed to the Archive, the Research Library at the Nigerian Tribune to gather some badly needed pieces of information on a project I was working on. I must be honest with you that inspiration wasn't forthcoming as I haven't gotten hold of a tangible resource that would fuel my drive into commencing this work i have just a week to document, even after two straight hours of standing and browsing through the mountainous books shelves. Let me feed your curiosity with what I was doing, I was trying to jot down the thoughts, views, opinions and the expectations of the masses at the climax of 1998 when Military Rule was gradually decomposing and the early 1999, the year which staged the approach of democracy.

Just then, I got my hands on an old, not-too-good looking newspaper, frail and fragile as time was telling on it. I flipped through the pages, looked through it expectantly, closed and opened again, and there on the first page was a journalist interview of Baba Fawehinmi who was at the time celebrating is 60th birthday. I quickly survey it, catching some words I needed, then I started again, read the whole intercept while standing, after which I rushed to my table, open my book, took my pen and put on the Laptop Computer. I kid you not, for the next four hours, I was stuck to my chair working on this documentary, reading, writing & typing, in that order.

SAM Gani had a lot of ideas on activism & humanity one couldn't think of, his passion for the masses could not be underrated as it could be feel in the emotions in his voice, even with mere reading of his words. I could remember some of his own words, "these people by their own leaders are being crucified mentally, socially, culturally, educationally and economically." He furthered, "look out the chairs and tables of respectability, they are being seated on by looters and human hunters."

Yesterday, 21-04-018 marked the 80th posthumous birthday of this great icon of humanity, Gani Fawehinmi, the man not too long history has it that he was the most jailed Activist in the record of the country. I hope this selfless Man whom I admire so much, who lived his life to serve his own people and country his resting peacefully in Valhalla; there, which is the home of great men.