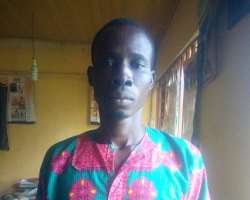 A notorious thug at Ogiri-Ojule village in Odeda Local Government area of Ogun State, Soji Ogunrinola popularly known as bulldozer has defiled a 13-year-old girl who was in the village for holiday.

The Nigerian Voice gathered that the suspect forcefully had carnal knowledge of the the little girl and threatened to kill her if she raised alarm.

Some village dwellers who noticed blood stains on her clothes questioned the girl to explain what happen to her and she narrated her ordeal in the hand of the thug.

The matter was reported at Odeda Divisional Police headquarter by one Monsuru Badmus, the step father of the victim.

The DPO Odeda Division, CSP Muhammad Baba Suleiman led policemen to the scene where the suspect was promptly arrested.

The Police Public Relations Officer for the Ogun State Police Command, Abimbola Oyeyemi told The Nigerian Voice that the suspect has confessed that he committed the offence.

The PPRO also told our correspondent that the victim had been taken to the Federal Medical Center, Abeokuta for medical examination.

The Commissioner of Police in the state, Mr Ahmed Iliyasu ordered the case to be transferred to Anti Human Trafficking and Child Labour Unit of the State Criminal Investigation and Intelligence Department for proper investigation and prosecution of the suspect.