Press Briefing By The Chief Of Army Staff, Lt Gen Ty Buratai On The Planned Conduct Of Operation Last Hold From 1 May – 31 August 2018 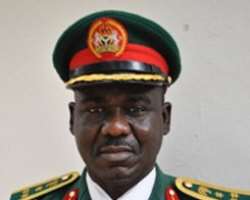 1. Gentlemen of the press, on behalf of the Chief of Army Staff, I most sincerely welcome all of you to Army Headquarters Conference Room, venue of today’s briefing on the planned conduct of Operation LAST HOLD. You may recall that the Nigerian Army has been engaged in the conduct of counter insurgency operation tagged Operation LAFIYA DOLE in the North East region for some years with considerable successes. However, the complex and adaptive nature of the Boko Haram insurgency has resulted in the dissident group still sometimes being engaged in abductions, attack on soft targets, Improvised Explosive Device attacks and suicide bombings.

2. It has become expedient for the Nigerian Army to change operating tactics, techniques and procedure in the North East region. Accordingly, the Nigerian Army Day Celebration (NADCEL) 2018 will be commemorated with the conduct of an operation tagged Operation LAST HOLD in Northern Borno within the North East Theatre. The design is to deploy personnel and equipment to showcase the combat efficiency of the NA and thereafter conduct operations to totally destroy Boko Haram locations in the Lake Chad Basin.

3. Operation LAST HOLD is expected to last for 4 months and it will entail deployment of 6 additional manoeuvre brigades and other critical assets in Borno State. The operation is intended to facilitate the clearance of the Lake Chad waterways of sea weeds and other obstacles obstructing the movement of boats and people across the water channels. It will also ensure the destruction of Boko Haram Terrorist camps and strong points in the Lake Chad Basin. The operation will also facilitate the rescue of hostages. The operational end-state of Operation LAST HOLD is the total defeat of the Boko Haram Terrorist Sect. Strategically, the conduct of Operation LAST HOLD will facilitate the restoration of fishing, farming and other economic activities in the Lake Chad Basin. Additionally, it will facilitate the relocation of Internally Displaced Persons from IDP camps to their communities.

4. Operation LAST HOLD is conceptualised to involve the conduct of population influence activities targeted to improve Civil-Military relations in the North East region. It is pertinent to note that Operation LAST HOLD is set to record remarkable achievements that would make the nation proud of the Nigerian Army’s determination at sustaining its constitutional role of defending the territorial integrity of the nation as well as its commitment to aid the civil authority to bring about peace and security. In this regard, law abiding members of the public in Northern Borno State are enjoined not to panic as their safety and well-being have been deliberately factored in the operation. The general public is requested to remain vigilant and be security conscious, as suspected insurgents may be fleeing from military operations in the North East and finding safe haven amidst our communities. The public is also reminded to report any suspicious activity or movement to the nearest military formation or other security agencies for prompt action.

5. Gentlemen of the press, you have always been our partners in progress; hence we are using this opportunity to request you to give this operation widest publicity in your respective media. On this note, on behalf of the Chief of Army Staff, officers and soldiers of the Nigerian Army, I thank you all for honouring our invitation. I will now take questions from you and clarify doubts if any.

Chief of Training and Operations (Army)