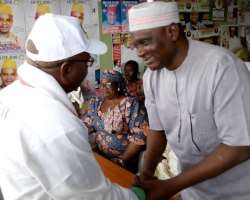 The Ife-born business mogul, Chief Gbenga Owolabi has submitted his intention letter to contest the September 22nd governorship election in the state on the platform of the People's Democratic Party.

He submitted the intention letter to the State Chairman of the party, Honourable Soji Adagunodo at the party Secretariat locate at Biket area in Osogbo, capital of Osun State.

Before proceeding to Osogbo for the submission of the letter, Owolabi who is also the Oluomo of the Source visited the Ooni of Ife, Oba Adeyeye Enitan Ogunwusi and sought royal blessings which the revered monarch showered on him and assured him of his backing.

The PDP Secretariat was agog when Owolabi's and his mammoth crowd of supporters stormed Osogbo and received by the party chairman at the Secretariat.

In his address, Owolabi expressed optimism that God will give PDP victory in the elections and that he would become the next governor of the state.

In his remarks, the Osun PDP Chairman commended Owolabi for the matured manner he was carrying out his campaign and assured him hat the process of selection of the candidate of the party would transparency with assurance that all the aspirants would be given equal chance.