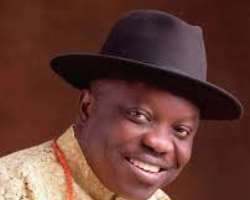 Ahead of the 2019 general election, one of the senatorial hopeful from Delta South Senatorial District and immediate past Governor of Delta State, Dr. Emmanuel Eweta Uduaghan, has said he wants to represent Delta South Senatorial District at the Senate in 2019 because of his desire to pursue quality legislation that would lead to the end of the crisis in the Niger Delta region.

Dr. Uduaghan who spoke recently in a media chat, disclosed that he would soon officially declare his intention to contest the senatorial seat of Delta South at the National Assembly, “I have not declared but I have decided to run. The official declaration is going to be very soon,” Dr. Uduaghan said.

Dr. Uduaghan, who was instrumental to the emergence of the incumbent senator representing Delta South, Senator James Manager 15 years ago, also said he withdrew from the race in 2015 to ensure that peace reigned in the state as he has always maintained that peace was more important than electoral victories, pointing out that the coast was now clear for him to serve his people.

In his words: “Despite the pressure from the good people of Delta South in 2015, I decided to step down, but looking at the horizon now, the issues that caused the security challenges that made me to shelve my ambition in 2015 are no longer there”.

Uduaghan, a chieftain of the Peoples Democratic Party (PDP), gave reasons why he wants to go to the upper chamber of the National Assembly and spoke of his plans for his constituency, the Niger Delta and the entire country.

According to him, without being boastful and in terms of capacity, he had the capacity to do the work of a senator in Delta South Senatorial District, and the experience he garnered over the years as commissioner, Secretary to the state government, governor, among others, had prepared him to serve at the national level.

“I was commissioner for four years under Chief James Ibori and I was close to him. I knew what he was doing in terms of peace issues. I was the first state government official to enter into creeks to meet ex-militant chief, Government Ekpemupolo alias Tompolo in the heart of the Niger Delta as SSG to start negotiating peace with him. I did it severally when I was the governor of Delta State. At one of the outings, it was even the soldiers that pointed AK-47 at me when I was coming back.

“Sometimes, I would come back at night from negotiating peace, so I know the place in and out. I have been there in the day and at night, in fact, at one of them, I was sitting on a chair with about 20 of the boys with their guns, they were drinking, and we were there for three hours negotiating peace. I know the challenges; let me just say this, what we did and what the government has been doing is having what I call two boxes in managing the problems,” he explained.

The former governor said the first was that of engagement, as he used his influence then to mobilize religious leaders, traditional rulers and the youths to engage the boys in the creek in dialogue.

“We had the other box of enforcement; that is, using the military, the army, the police, navy, etc. One will think that with the two boxes, that would be enough to deal with the problems, but they are still there and re-occurring in different forms, some criminality and some genuine agitation; we still have the Niger Delta Avengers bursting pipelines; sometimes, we have those hijacking boats and sometimes ethnic quarrels,” he said.

According to Uduaghan, from his experience, the military, as an enforcement body was not a permanent solution to the problems in the Niger Delta as they were not very familiar with the terrain, “so, when the thing is really happening, it requires mobilizing the young people to show them the terrain or to prevent the crisis.

“To deal with it, we need the local people to be involved in the security arrangement and that will require legislation. The Waterway Security Committee I put up for instance, there is no law backing it up, so we need to put up laws that will help us in moving forward in solving the Niger Delta crisis.”

The Itsekiri-born politician added that there were lots of projects abandoned in the Niger Delta, and specific laws were needed to revamp these projects. If there were previous laws, he said, there was the need to bring them out and tailor them to meet what is happening in the Niger Delta.

He lamented that since the crises in the Niger Delta; nobody has been prosecuted or brought to book.

“Nobody has been prosecuted so far. First of all, you cannot catch them and the people that are supposed to catch them don’t know how to catch them. I am going there to put up an enforcement body of people who know them and can get them and take them to court. If we are not serious of law and order in the Niger Delta, we will continue to have crisis.

“Right now, there is no law and order in the Niger Delta and we need to come out with and remind ourselves of the existing laws and tailor them towards the issues in the Niger Delta so that we can have permanent peace. A lawmaker is to make law and that will be my cardinal point. Also, there is the issue of attracting things to your area. There are very few people in the National Assembly that I don’t know. I have the capacity to attract things to my area more than anybody on the field today.

“Also, Nigeria has invested in me. Being in government for 16 years is a lot of investment. I think I should pay back by going to serve at the national level,” he explained.

Uduaghan who believes so much on modular refineries and development of the non-oil sector, promised not to collect his pension as a former governor while in senate if given the mandate by his people.

He also pledged to carry his constituents along by involving them in the lawmaking process and holding town hall meetings every six months.

“I am going to sign a contract with my people; the Senator-Citizens Contract. I have a group of lawyers who are already working on it,” he disclosed.

Asked his chances of picking the PDP ticket and eventually winning the senatorial election, Uduaghan, 63, sounded upbeat, noting that he is a grassroots politician well known and trusted by the people. He promised to justify the confidence reposed in him by ensuring them the very best representation if they give him the mandate to represent them in the Senate in 2019.

Already, various groups and individuals in the Delta South Senatorial District are waiting with bated breath to see their amiable son of the soil in the race as they believe he would replicate in their constituency his magic that turned around entire Delta State.