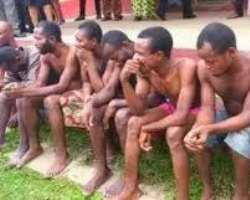 The  Police Command in Katsina State has arrested eight suspected kidnappers terrorising residents of the state.

The command's spokesman,  DSP Gambo Isa, made this known in a statement in Katsina on Monday.

The spokesman said the suspects, through a phone call, threatened to kidnap and kill one Haruna Bello and Nuhu Yusuf of Gozaki town if they refused to pay a ransom of three million naira.

He said: “the victims have already sent N300,000 to them with a promise of sending the remaining amount later to avoid being kidnapped or killed.''

Isa said the duo later reported to the police and the police Special Anti Robbery Squad swung into action and arrested of the suspects.

“During investigation, police arrested the four suspects who confessed to have committed the act.

“The police recovered the sim card they used in sending threat messages to their victims,'' he said.

The spokesman said that the suspects were the syndicate terrorising people of Kafur and Danja Local Government Areas of the state.

The spokesman said that the suspects would be prosecuted after investigations. (NAN)