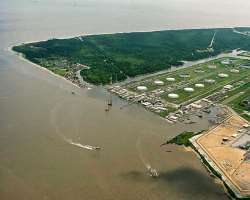 The Federal Government has approved the dredging of the Escravos Bar of Warri Port at a cost of N13 billion.

The contract sum would also finance the replacement of the bad navigational aids at the seaport.

The Escravos Bar dredging is part of measures being put in place to make the seaport commercially viable.

Neglect of the port had impeded the coming in of big vessels and other ocean going barges to Warri Port.

Earlier, Hadiza Bala Usman, Managing Director, Nigerian Ports Authority (NPA), spoke of the economic implications of the project and the reform programmes she had been able to initiate at the NPA.

She said: “It will fundamentally change the fortunes of Warri Ports. It will expand the utilisation of our eastern ports.

“We believe in the need to ensure that all ports locations are given the seamless access by providing dredging works and that is what we are here to do today.”

According to her, she had been able to execute transparency and elimination of corrupt practices in the NPA.

“We have noted the Treasury Single Account, we have had entities comply to the TSA, we have also made our budget very transparent.

“We believe in building institutions and we have done tremendous work in deploying Human Resources capacities within our systems,” she said.

At the Federal Executive Council (FEC) meeting chaired by Vice President Yemi Osinbajo, on Wednesday, a total of N61.464 billion was approved for projects spanning road construction, buildings, including the proposed dredging contract for the Warri Port.

Fashola said: “One was for Baban Lamba-Sharam Road in Plateau State for the construction of 44.625 kilometers road for N19.392 billion.

“The second was for Lagos-Ota-Abeokuta Road 81 kilometers. That road was first awarded in year 2000 and it has since been left uncompleted because there were no budgetary provisions for it.

“This administration is trying to move this contractor to site that informed the revision of the rate.

“So, the revised rate was brought to council today and a revision of N22 billion was approved for the 81 kilometers road, bringing the total contract price to N56.701 billion.”

Defence Minister Danbazzau noted that N234 million was approved for the construction of two buildings, cadet mess, and a cafeteria.

“FEC approved contract for the completion of two faculty buildings and Cadet Mess and Cafeteria for Police Academy in Kano.

“The reason being that there is a minimum requirement to be met by the academy before accreditation of programmes.

“In May, 2010, a memo was submitted for the approval of a draft bill when it was upgraded to a degree awarding institution.

“So, the total amount of the contract is about N234 million. Once it is completed, we will invite the NUJ to have a look at some of the programmes that are yet to be accredited,” he said.

For Water Resources, the minister said his ministry presented a policy memo highlighting the crisis facing water and sanitisation in the country and the need for government to take action.

“We highlight the fact that urban water supply is regressing, access to improved sanitation has also decreased over time that we have not been able to meet the Millennium Development Goals and that’s why services in the rural areas are unsustainable, and spending on water sector has declined by .7% to .72% of the GDP in 2010.

“We submitted a memo to council to approve an action plan on how to address these issues.

“We had three prayers for the council to approve the action plan: to declare a state of emergency on water and sanitation sector; to approve the establishment of Water, Sanitation and Hygiene Fund for the country,” he told State House correspondents.

On his part, Garba Shehu, Presidential Spokesman, said the Minister of Women Affairs, Senator Aisha Hassan, tabled issues bedevilling the female gender before the cabinet members, top among which were the need for women empowerment programmes to be undertaken, capacity development for women, promotion of human rights, fighting violence against women, rehabilitation of victims of gender violence, promoting the health of women and children, and efforts on the rescue of Chibok and Dapchi girls.