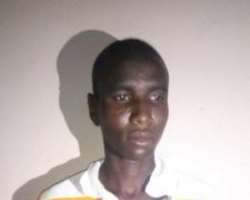 Adamu Hassan aka Baale was nabbed by the operatives at Kaltungo in Gombe State during a Stop and Search Operation along Bauchi - Gombe road.

Colonel Onyema Nwachukwu, Deputy Director Public Relations, Theatre Command Operation Lafiya Dole in a statement Tuesday said in a separate operation, troops of operation Lafiya Dole in a joint operation with Vigilantes on Monday evening busted a raid operation by elements of the Boko Haram terrorists rummaging for food and logistics at Kudiye community , along Dikwa - Gulumbagana Road. The four man raid team was intercepted by troops following a tip- off that the insurgents were on their way to loot the community.

The insurgents who revealed that they belong to the Abubakar Shekau faction of the Boko Haram terrorists group have been taken into custody and are making useful confessions.

Troops also recovered two motorcycles, bags of grains and tamarin from the insurgents.

The troops neutralised the insurgents during clearance operations to rid the areas of elements of the Boko Haram insurgents who had escaped from the troops' offensive operations in the Sambisa forest.

Troops also recovered two AK 47 rifles and a motorcycle from the insurgents.

"It is expedient to bring to public awareness, that in its desperation to survive troops' onslaught and remain relevant in the eyes of the public, the Boko Haram terrorists group has continued to make frantic efforts to infiltrate communities with Person Borne Improvised Explosive Devices (Suicide bombers) to callously unleash terror and fear on the populace".

"Members of the public are therefore enjoined to remain vigilant and watchful while going about their normal activities and promptly report suspicious persons or activities to appropriate security agencies".