Russia warns US: There will be 'most serious consequences' if you Syria over alleged chemical attack 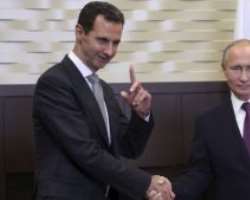 Russia is warning the U.S. against any “military intervention” in Syria over the government’s alleged chemical attack against civilians this weekend, saying any such response would be “unacceptable” and lead to the “most serious consequences”.

The foreign ministry in Moscow also says in a statement on its website that allegations of the chemical attack are “fabricated,” suggesting the claims were invented by rebel forces and the Syrian Civil Defense known as the White Helmets.

“It is necessary to warn again that military intervention under invented and fabricated pretexts in Syria, where at the request of the lawful government there are Russian military personnel, is absolutely unacceptable and can lead to the most serious consequences,” the statement reads. “The aim of these false speculations, that have no basis, is to shield the terrorists and the irreconcilable radical opposition, who reject a political solution, at the same time while trying to justify possible armed strikes from outside.”

The alleged attack on Saturday killed 40 in the rebel-held town of Douma, multiple opposition and rescue groups including told The Associated Press, which was unable to independently verify the reports.

It came a year and a day after President Donald Trump ordered dozens of strikes on a Syrian regime air base for its alleged use of sarin gas on April 4, 2017, that killed approximately 100 people, according to the the State Department. More than 30 of the victims were children. The government of Syrian President Bashar al-Assad denied carrying out the attack.

Trump on Twitter called it a “mindless CHEMICAL attack” and blamed “President Putin, Russia and Iran ” for backing the government of Syrian President Bashar al-Assad .

The State Department, while unable to confirm reports of chemical weapon use Saturday, called the alleged attack “horrifying.”

“Reports from a number of contacts and medical personnel on the ground indicate a potentially high number of casualties, including among families hiding in shelters,” Nauert said in a release. “These reports, if confirmed, are horrifying and demand an immediate response by the international community.”

The United Nations also weighed in, saying that the alleged use of chemical weapons if true is “abhorrent.”

“It is critical that civilians be protected,” the statement from spokesman Stephane Durjarric said. “There has also been shelling on Damascus city, reportedly killing civilians.”

But a U.N. war-crimes investigation found the Assad regime was responsible for the attack last year in Khan Sheikhoun.

Human Rights Watch has estimated the Syrian government has committed “at least five more chemical weapons attacks” since April 2017 when Trump ordered 59 Tomahawk missiles fired on a Syrian airbase. The missiles were fired after the U.S. said a year ago that Assad was responsible for a sarin gas attack on the area of Khan Sheikhoun in northwestern Syria, which killed over 100 people.

Russia's military, which has supported Assad, denied the Syrian army is behind the chemical attack in Douma in Eastern Ghouta on Sunday and accused Western countries of trying to use the alleged attack for their own ends.

“We decisively deny that information,” the head of Russia's Reconciliation Center in Syria, Major Gen. Yuri Yevtushenko, told Interfax, referring to allegations that the chemical attack was caused by a chlorine bomb dropped by pro-Assad forces.

Yevtushenko said that after Douma has been retaken by the government, Russia is ready to immediately send its own chemical weapons experts in to “collect data that will confirm the fabricated character” of the allegations.

“We express our readiness, after the liberation of Douma from militants, to immediately send Russian specialists in radiological, chemical and biological protection for the collection of data, that will confirm the fabricated character of these statements,” Yevtushenko said.

Yevtushenko then accused “a range of Western countries” of using the allegations of the attack to try to hinder the Russian-Syrian operation to pull out militants from Douma.

“For that, that theme beloved by the West, the use of chemical weapons by the armed forces of Syrian Arab Republic, is being used,” Yevtushenko told Interfax. He also said the allegations were being made by groups like the White Helmets, which he accused of “being widely known for their fake news .”

The U.S., meanwhile, has supported Kurdish and Arab forces on the other side of the country as they attempt to eradicate ISIS forces from the country.

It was less than a week ago that Trump announced during a rally in Ohio that he planned to get U.S. troops out of Syria “very soon.” The timing of the comment caught even senior officials off-guard, a senior administration official and a U.S. official familiar with the matter told ABC News. He repeated that he wanted the U.S. military out of the country in a press conference on Tuesday.

The White House walked back those claims a little on Wednesday, with press secretary Sarah Sanders telling reporters the president isn’t going “to put an arbitrary timeline” on withdrawal.