The Effects Of Social Media On The English Language In Nigeria 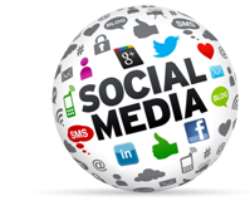 English is the most geographically dispersed language in the world and sixty percent of world literature are produced in the English language. The language which was originally introduced to Nigeria by the British colonialists has not only become the official language of the country but also serves as the language of mediation in the face of the nation’s linguistic heterogeneity. It is the language that unites Nigerians as a people in addition to being the language of education, commerce, politics, journalism and the window through which we see the world. Proficiency in the English language is a necessity for all Nigerians as the language also serves as an instrument of upward mobility and social prestige.

Social media are websites and computer programmes that make communication possible through the use of computers or mobile phones. Social media have unquestionably come to stay with the world forever as they have overtime gone beyond being a craze among the youth and are now being positively deployed for career and business purposes. The crux of this article, however, is to evaluate the effect of social media on the proficient use of the English language among Nigerians. I must admit at this point that this is not an issue to be addressed straightforwardly as there are inevitably two wide sides to the coin.

To start, we must admit that social media have got people stuck on abbreviations such that many presently know how to spell less than they could at childhood. No thanks to the autocorrect facility on many phones which readily helps people complete their spellings. Would you like to know the academic effect of this addiction to abbreviations and the autocorrect facility on people’s fluency? Talk to us teachers that mark essays at secondary and tertiary levels. It is not an exaggeration that even in academic writings, students now (un)consciously spell words such as “is, that, okay, you, between” as “iz, dat, kk, u, yu, btw” respectively. Also, giving that most students now write and spend more time on social media than they do anywhere else, there is a falling standard for grammatical details. Even when they attempt writing in standard language, we find linguistic anomalies ranging from subject-verb inconsistencies, to run-on sentences, ambiguous expressions, dangling modifiers and so on, all being indications of an improper mastery of the language.

On the contrary, the social media have got some benefits. They help many cultivate a reading habit which overtime improves their ability to communicate in the language, both in spoken and written forms. It has served as a platform for linguistic growth for very many people who do not have any other reason to write except for the interpersonal purpose which social media afford them.

To draw a conclusion, it will be mythical to assume that we can discourage people from using abbreviations and other supposedly bastardised forms during social media interactions as these make for easy and spontaneous flow of interpersonal interaction. Chatting on social media is a quasi-conversation which to a great extent shares the features of face-to-face communication and which like spoken language cannot be entirely formal. This article, therefore, only urges people to pay attention to the purpose of writing as regards their linguistic choices. Abbreviations should be avoided in formal writings and there should be a total adherence to the standard rules of usage. Students should also cultivate the habit of writing words correctly even during chats as this too can become a habit for them overtime through a conscious effort. Personally, I spend much time on social media but I have cultivated the habit of spelling words correctly and I am not only used to it but also comfortable with it. We are not only addressed as dressed; we are also measured by our language habit: let your writing depict you well.