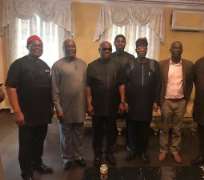 Former Vice-President of Nigeria, Alhaji Atiku Abubakar has began the race towards the 2019 presidential election under the platform of the Peoples Democratic Party with a flag off of his campaign consultation in Port Harcourt, Rivers State on Tuesday.

The event which took place at the banquet hall of the Rivers State Governor’s Office, Port Harcourt was chaired by the Governor of Rivers State, Chief Nyesom Wike and had in attendance the former Governor of Ogun State, Otunba Gbenga Daniel; former Governor of Enugu State and one-time National Chairman of the PDP, Dr. Okwesilieze Nwodo; Deputy Majority Leader of the Senate, Senator Abdul Ningi; Senator Lee Ledogo Maeba; former Minister of Justice and Attorney-General, Michael Aondoakaa; amongst many others.

In his opening speech, the former vice-president reiterated his commitment towards the creation of a new Nigeria devoid of favouritism, segregation and ethnicity but one built on a foundation of industrialization and economical revolution.

Atiku disclosed that the problem of Nigeria is not the lack of resources or skilled manpower but the lack of leadership willpower that is needed to make conscious decisions and give adequate directions.

Speaking at the ocassion, Governor of Rivers State, Barrister Nyesom Wike expressed confidence in the the former Vice President and Waziri Adamawa as the flagbearer of the Peoples Democratic Party in the 2019 election. According to Wike, “Atiku Adamawa has what it takes to be the President of Nigeria; the Presidency is for the man who has the track record. Atiku has the track record”