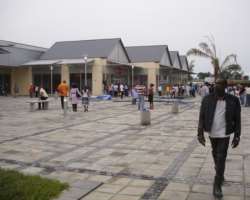 PHOTO: THE RETAIL SHOPPING AREA OF THE TINAPA RESORT IN CALABAR.
Listen to article

CALABAR, June 09, (THEWILL) - The Cross River State Government has assured intending investors in the State of safety and protection for their businesses at all times.
Governor Liyel Imoke who was represented by his Deputy, Mr. Efiok Cobham gave the assurance when he received the chairman and members of board of a Chinese firm, Tiangsu Jialong Engineering Constructions Company in Calabar, Wednesday, maintaining that as the nation’s paradise, Cross River offers the best investment climate in the country.

He added that, "a few things stand to the credit of the State, low crime rate, limitless opportunity for business as well as tourism destination of the nation which has consistently hosted millions of persons to the biggest street party, Carnival Calabar since 2003, pointing that the state has introduced some initiatives to maintain the tempo of its hospitality nature.

He enumerated some of the measures initiated to make the state investment friendly to include, introduction of a standardized tax regime and over hauling of the land tenure system to make land easily accessible and affordable for any form of development.

The Governor observed with dismay the low capacity of indigenous firms which has been a major bane to industrial development of the state and expressed delight that a local company could align with a reputable Chinese firm to enhance its capacity and grow the economy of the State while reminding the Chinese firm to always respect the law of the land and protect her image at all times and promised to give them all round support to enable it succeed in the task.

Earlier, a member of the board of Jiangsu Jialong construction company, Professor Eyo Etim Nyong who spoke on behalf of the chairman of the firm, said that the Chinese Company was collaborating with some local firm to establish a 200 metric tone granite quarry and full-fledged asphalt plant in the state.

He added that the choice of the firm which he noted is a triple edge company, is that it can easily access loans back home to execute the project successfully, maintaining that the familiarization tour of the board of the firm was a testimony that the partnership would stand as the firm has concluded arrangement to sign a memorandum of understanding (MOU) to concretize the collaboration and appealed for support from the State Government.