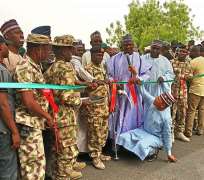 The Nigerian Military has finally reopened Maiduguri-Bama-Banki road today Saturday which has been closed since 1st September 2013 following the nefarious activities of the boko Haram insurgents along the axis of the Sambisa forest.

Declaring the road reopened, Borno State Governor, Alhaji Kashim Shettima said Borno people will continue to pray for the successes of the Nigerian President and Military in the fight against the boko Haram insurgency.

He added that Borno state government will continue to support the federal government rebuild the north east and ensure the return of the IDPs back to their original homes, stressing that, security is the job of everybody while urging all and sundry to support and cooperate with the security agencies to return peace permanently to the state.

The governor who was represented by the Deputy Governor, Usman Maman Durkwa added that there was no doubt the reopening of the road will boost socio economic activities of the area, calling on the people to however carefully use the road.

The Theater Commander, Operation Lafiya Dole, Theater Command Headquarters, Maiduguri, Major General Rogers Nicholas said following improved security in the area since he assumed office and degradation of the boko Haram insurgents, the Nigerian Milliary deemed it fit for residents of the area to start returning back home and resettle down in their host communities to continue their peaceful livelihood.

The Theater Commander further appealed to those who have assess to use the road to be more careful and watchful while plying the road, noting that, however, the military will still provide escorts or security to the motorists plying the road for now depending when it is deemed fit for the motorists to ply the road freely and alone.

The Chairman NURTW, Borno State who was represented by the State Secretary of the Union, Alhaji Ahnadu Musa thanked the Federal government, President Buhari and the Nigerian Armed forces for reopening the road which he described as a unique commercial route for the Sahara trade since time immemorial that has been closed since 2013.

He said the closure of the road had paralyzed commercial activities in the area and rendered most businessmen and women jobless and hopeless while assuring the military that the members of the NURTW will assiduously comply with the conditions or rules of the mandate given to them on the use of the road.

Ahnadu added that the NURTW Exco had sat down with it's members and ironed out rules and regulations for the heavy long drivers and other commercial drivers that will ply the road with a view to maintain the conditions given to the Union by the military.

He also assured that rhe members of the Union will report any suspicious element or movement on the road to the security agencies for further necessary action while appreciating the unique sacrifices and efforts of the theater commander within the short period of his tenure.

According to him, only 100 vehicles have been approved to be screened or cleared by the military for the first or inaugural trip to flag off the reopening of the road while calling on the military to continue to patrol the road to ensure safety of the road.

He also thanked the military, Governor Kashim Shettima and other security agencies for their support and efforts, noting that, the reopening of the road will definitely boost economic activities and generate government revenue as well as serve as a shorter link to other neighbouring countries of Central Africa, Libya and Cameroon Republics among others.

The Secretary also urged the villagers along the routes to assist in passing useful information to the motorists plying the road and security agents on any suspicious movement or element while debunking the rumour that heavy vehicle drivers give military money on the road.

A trailer driver from Maiduguri to Banki, Malam Adamu Haruna told our correspondent that, "definitely, i am happy and among those who are or highly impressed with this development and have been waiting patiently for many years to see this day becomes a reality.

" Nobody believe this could happen within a short period like this. Some of us have even lost hope and confidence in the military that this road will be reopened so soon but look at it today, it is a reality and we will be plying the road again with our loads and passengers.

"We have actually lost a lot in the past without business and movement. Everything was at a stand still until today that we are able to load for Bama and Banki. We pray God to protect us and the military. We also thank the military, federal government and President Buhari for their support and efforts without which, we couldn't have been here today.

" We still appeal to our NURTW leaders to cooperate and support the military to serve the commercial activities of the area as life will return and socio economics activities will flourish," Adamu said.