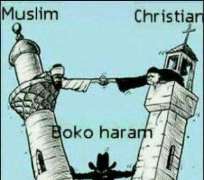 The Christian Association of Nigeria, the #BringBackOurGirls coalition and the Sultan of Sokoto, Alhaji Sa'ad Abubakar lll-led Jama'atu Nasril Islam, have disagreed over the amnesty promised to repentant Boko Haram insurgents by President Muhammadu Buhari.

The President on Friday promised to grant amnesty to members of the Boko Haram sect who are ready to drop their arms and embrace peace.

Buhari made the promise at the Presidential Villa, Abuja, while receiving girls who were abducted from their school in Dapchi, Yobe State last month and were released on Wednesday.

He said, “While further efforts are being made to secure the release of every abducted citizen in Nigeria, the government is ever ready to accept the unconditional laying down of arms by any member of the Boko Haram group, who show strong commitment in that regard.

“We are ready to rehabilitate and integrate such repentant members into the larger society.

“This country has suffered enough of hostility. Government is, therefore, appealing to all to embrace peace for the overall development of our people and the country.”

The Secretary-General of the JNI, Dr. Abubakar Khalid-Aliyu, told one of our correspondents that it was a good development as long as it would guarantee peace in the country.

He, however, noted that the amnesty should only be granted to “those that show remorse,” adding that those granted amnesty should be monitored before being reintegrated into the society.

CAN, on the other hand, frowned on the move, describing it as a sign of “weakness on the part of the government.”

The media aide to the CAN President, Pastor Bayo Oladeji, in an interview with Saturday PUNCH, said, “Why grant amnesty to criminals who have killed many people? It shows weakness on the part of the government or sympathy for them as being speculated.

“In what way are they different from armed robbers, kidnappers, ritual killers, and corrupt people that are facing prosecution?

“What kind of government are they running? Where on earth are we having all kinds of messy events being orchestrated by the government? May God deliver Nigeria!”

The # BBOG said some insurgents that were freed in the past later backtracked and unleashed terror on the people.

The group questioned the rationale behind the move, noting that the government had not presented any strategy for preventing freed terror suspects from going back to terrorism.

The BBOG spokesperson, Sesugh Akume, said, “Some of the insurgents released later went back to join their colleagues. We have evidence of this. What is the strategy behind declaring amnesty for terrorists and releasing those in custody and allowing them to go back to what they were doing?”

He dismissed the explanation made by the Minister of Information, Lai Mohammed, that the government had a ceasefire arrangement with the insurgents and that they should not have abducted the Dapchi schoolgirls.

He said, “The Minister of Information said they had a ceasefire arrangement with Boko Haram and they ought not to have abducted the Dapchi girls, so they had a moral burden to return the girls. You are talking about terrorists and morality?

“It seems as if the rest of us understand the terrorists differently from how the government understands them. They need to come down from their high horse and explain to us what is going on.

“How can the government be talking about Boko Haram and morality? Those they released in the past went back and unleashed more terror, so how are they going to prevent this from happening again?”

Similarly, the apex Yoruba socio-cultural organisation, Afenifere, expressed concern about the release of thousands of Boko Haram suspects and the promise of amnesty for repentant insurgents by the President.

The group's spokesman, Yinka Odumakin, said, “We are getting uncomfortable with the way this government is getting close to Boko Haram. We remember that when this government came to power, Zakari Biu, a commissioner of police, who was suspended for releasing a Boko Haram kingpin, was reinstated into the police as CP.”

Buhari had earlier warned the people he described as politicising the security situation in the country, saying they should desist or incur the wrath of security agencies.

“May I also warn against those elements who have chosen to make a political fortune of our citizens' misfortune.

“Government would not tolerate any attempt by any person or group to trivialise or politicise security issues for politically motivated ends.

“Accordingly, security agencies would not hesitate to decisively deal with such unscrupulous characters,” he said.

Buhari also announced that he would not hesitate to wield the big stick against security chiefs if any case of abduction was recorded in any part of the country.

He said he had directed them to beef up security around all schools.

“The security services have since been directed to put in place further measures around all schools vulnerable to attacks to ensure the safety of our pupils/students, teachers and school workers.

“I have tasked all the security agencies to work to ensure that we do not witness any recurrence of these incidents.

“Security chiefs have been warned in clear terms that any lapse on their parts will be viewed seriously,” he said.

The President announced that a total of 107 students previously abducted had been unconditionally released by their abductors.

He said the unconditional release signified his administration's commitment to the security and well-being of all Nigerians.

He said he was never in doubt about his administration's focus and direction since his assumption of office.

He restated his position that security, anti-corruption and revamping of the nation's economy remained the main focus of his government.

Buhari added, “You will recall that on the 14th of this month, I paid a visit to Yobe State during which I sympathised with the parents, families, government and people of the state for the tragic abduction of the students in Dapchi.

“I made a solemn pledge on my word of honour that this administration would do everything possible to ensure the unconditional release of the girls.

“I further tasked all the appropriate security agencies to safely bring back the girls. We also reached out to our contacts at home and abroad. We embarked on back-channel shuttles with a clear view to bringing this tragedy to an end.

“We entered into negotiations solely to make sure that no single girl was hurt. This strategy paid off as the girls have been released without any incidents. Let me re-emphasise our administration's commitment to the fight against terrorism and insurgency, and also call on all Nigerians to join in this task.”

Buhari assured the rescued pupils that they would freely live and pursue their dreams in Nigeria without fear of violence or molestation.

While the parents of the freed Dapchi girls celebrated their reunion with their children, the President appealed to the Chibok Community never to lose hope or to despair.

He said he was determined as never before, to bring back the remaining Chibok girls, adding “and this, we must accomplish. And that will be soon by God's grace.”

The President thanked all Nigerians, who in spite of political differences, prayed and showed solidarity with the families of the abducted pupils during the period that they were in captivity.

This, he described as the Nigerian spirit.
“We can and should sustain it beyond moments of sorrow. I remain thankful to the international community and our friends who offered varying degrees of assistance during the back-channel communications.

“May I, on behalf of the government and people of Nigeria, extend our appreciation to the security agencies for their loyal and tireless efforts in making this day a reality,” he added.

Fatima Bashir, who spoke on behalf of the girls, thanked Buhari for his efforts in saving their lives and bringing them back home safely.

The Director-General of the Department of State Services, Lawal Daura, in his remarks, noted that uncoordinated comments by senior government officials incompetent to speak on the abduction complicated the girls' rescue operations.

Daura said four of the girls who were discovered to have broken legs were taken for X-ray at the DSS medical facility.

He also said all the girls were found to have one skin disease or the other due to their inability to have a bath for over one month.

He added that they had been medically examined, and those with ailments were treated, adding that the measures were taken to ensure that they were in good health.

The DSS boss attributed the girls' release to what he called painstaking, back-channel dialogue with their abductors.

He said, “It may be recalled that the President had given a clear directive to security agencies to use peaceful options to ensure the timely and safe release of the girls. What followed were intense dialogues behind the scene, spearheaded by the DSS.

“The insurgents' only condition was their demands for the cessation of hostilities and temporary ceasefire to enable them to return the girls to where they were taken from.”

Daura said the girls, including four representatives of their school (the Principal and Vice Principal) as well as their parents, were brought into the medical facility as part of measures to relieve tension and anxiety.

“The presence of these representatives have further reassured and stabilised the girls,” he said.

On the way forward, Daura suggested to the President that efforts should be sustained towards ensuring the release of all abducted persons in the North-East, improving the security of schools in vulnerable locations, and improving on the coordination efforts among security agencies to avoid future incidents, among others.

Meanwhile, the Defence Headquarters, Abuja, said on Friday that the military was unable to deploy troops in schools in the North-East because of the large geographical size of the region.

The Director, Defence Information, Brig.-Gen. John Agim, who stated this in an interview on Channels Television, said the military did not have enough personnel to supply to all the schools to prevent terrorists' abduction or attacks.

Agim described the Federal Government's decision to send policemen and personnel of the Nigeria Security and Civil Defence Corps to the region as commendable.

He said, “The military does not have the power to deploy (troops) in all the schools. It is not possible. People don't know the landmass that we have in the North-East and the number of troops that are deployed in that place. The landmass is very large.

“It is very difficult. It is not possible. Where the military was deployed in Dapchi, they (the troops) were taken away. They were deployed for other assignments. So, it is possible that the Boko Haram can operate in a place for a long time without the military presence.

“They were withdrawn out of Dapchi for another assignment on January 10 and this attack took place on February 19.”