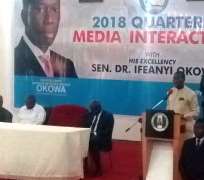 Delta State Governor, Senator Dr Ifeanyi Okowa has described the numerous clashes between herdsmen and farmers in the country as great threat to sustainable food production.

Speaking at the 2018 quarterly media interaction in Asaba, Wednesday, the Governor decried the threat posed by herdsmen to food production across the country.

According to the Governor, “if we are going to encourage agriculture in this country, we must address the loss of farm produce from these security challenges posed by the herdsmen/farmers clash all over the country”.

While disclosing that his administration took proactive steps, including setting up interventionist committees to ensure that the clashes does not escalate as being witnessed in some states of the federation. Governor Okowa expressed confidence that the Presidential Committee set up on the issue would proffer solutions for the Federal Government to give policy trust for Nigerians to follow.

He also, stated that the issue of herdsmen taking over Uwheru community in Ughelli North local government area was being taken care of by security operatives, asserting that his administration would always employ diplomacy to avoid loss of life as a result of the activities of herdsmen.

Fielding question from Journalists on the taking over of land belonging to Umutu community by the Edo State government, Governor Okowa stated that the Attorney-General and Commissioner of Justice has been directed to liaise with Umutu community because, the issue was before the court.

On the issue of security generally in the state, Governor Okowa thanked Deltans for their peaceful dispositions which has ensured effective take off of the multi-billion naira Premium Steel Rolling Mill, formerly, Delta Steel Company, Aladja. He attributed the performance of ground-breaking ceremony for the take-off of companies in the state and the flooding of the state by investors to the peaceful atmosphere in the state.

He observed that the state was peaceful, adding that his administration also, hold regular Security Council meetings to nip security challenges in the bud.