2019 Elections On The Brink Of Chaos Courtesy Ganduje/Kwankwaso Feud. 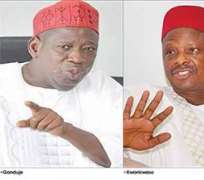 The hostile political relationship between Kano state governor, Umar Ganduje and his predecessor, Rabiu Musa Kwankwaso is now a major cause of worry for Kano indigenes and Nigerians in general. However its effect have been seen rubbing off on the infamous Kano underage voting picture and videos which was circulating in the public sphere recently, hence threatening the integrity of the 2019 General Elections.

Though many Nigerians are in the know about the feud between the Ganduje and Kwankwaso, but AljazirahNigeria can reliably state that a lot of untold stories lies behind the pictures of underage voters which emerged after the Kano local government elections. So many intrigues, manipulation and blackmail are now threatening the 2019 election and the future of the nation’s democracy.

Our sources reveal that while the Ganduje camp avoided due process and intimidated opponents out of the race to get ‘100 percent votes’ at the council elections, the Kwankwaso camp made sure it did all it could to further harm the reputation of an already flawed process.

Unfortunately, the infighting between both men in state is now a recipe for doubts on the integrity of the 2019 general elections.

Fight between one time god-father and god-son is no more a hidden secret, however to worsen the matter the duo’s security outfits and their stand offs have heightened the tension in the most populated city in Nigeria. In the February 10th local government election in the state, Kwankwaso camp feared the governor wanted to manipulate the polls in effort to take control of the party structure in the state. Hence two major security groups (Kwankwasiyya and Gandujiyya) are now established in Kano according to political followership.

Just in the last 24 hours Kano State Government trained 3,500 vigilance members on basic literacy and distributed uniforms worth over N200 million to various vigilance groups with a view to enhancetheir operations. Another move believed to be in line with Gov. Ganduje’s efforts in solidifying his footsoldiers.

Political observers, most Nigerians, believe that the fracas between the duo during the LG election was an avenue for the two politicians to test their political mettle and prowess in the polls, hence, would do everything possible to win the popularity war.

AljazirahNigeria gathered that the feud started when the Kano state governor excluded supporters of the Kwankwaso camp from the election.

Though both Kwankwaso and Ganduje belong to the ruling APC, but there were two sets of APC candidates for the Kano local government election, namely APC Kwankwasiyya and APC Gandujiyya candidates.

The Kwankwasiyya-led faction of the APC had sued the KANSIEC and the Kano State Government over the rejection of the list of its candidates. But the governor waved them aside and in one occasion even mocked the Kwankwaso camp for hiring only “one lawyer that stammers” in his bid to stop the conduct of the LG polls.

Governor Ganduje was quoted to have told candidates for the local government election, about 48 hours to the polls, “Do you see them as our friends? And now they want us to reconcile. Why should we reconcile? On what basis?”

Social media was agog with photos and videos of underage voting shortly after the election. The alarming pictures shook the entire country for what some Nigerians described as massive rigging and casting doubts on the forthcoming general polls. Opposition PDP was at the fore front of expressing concerns over the 2019 General Elections.

However, the INEC, Kano state government and KANSIEC all denied any involvement in the underage voting scam. Ganduje was not left out in the fray of denial as he described it as a “propaganda” while, KANSIEC’s chairman, Professor Garba Ibrahim Sheka, tagged it “a set up”.

How Real Are The Photos and Videos?

According to AljazirahNigeria sources on ground, in as much as we all are aware that underage voting is obtainable in our system, the photos of underage voters released after the Kano LG polls were deliberate, created to make the impression that the elections were not only illegal but flawed with irregularities.

Some Kano residents who spoke on the basis of anonymity to our reporter said those who released the videos are well known.

Another source said, “if you recall, unlike in other states, the videos and photos supposedly from Kano were not sourced or captured by journalists or observers. It was just released by politicians. No media house can vow it has that recording of underage voting”

Before the Kano LG elections, KANSIEC announce that it would not use card reader, a modern technology brought by INEC in the conduct of the elections.

AljazirahNigeria confirmed this reports through observers who monitored the polls and revealed that KANSIEC did not use card readers throughout the conduct of that election.

However in the video clip posted by those complaining of child voting in Kano LG polls, it is easy to notice that they(KANSIEC) were using card readers.

So, where did the trending videos and pictures came from?