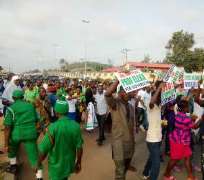 The forthcoming July 14 governorship poll in Ekiti State has taken an
interesting dimension as many beneficiaries of the federal government
N-Power scheme in the State today, walked the streets of Ado Ekiti to
express their support for the Deputy Governor, Prof. Olusola Kolapo
Eleka ahead of the election.

The N-Power beneficiaries, who were initially invited to a walk from
Ekiti State University Teaching Hospital, Ado Ekiti to a popular event
centre at Adebayo area of the town where a programme to be attended by
Minister of Solid Minerals Development, Kayode Fayemi was scheduled,
were led by former Senior Special Assistant to Fayemi on Mobilisation,
Hon. Tope Osatoyinbo.

As early as 8:30am on Saturday, beneficiaries of the N-Power who were
over 3,000 in number gathered in front of the Ekiti State Teaching
Hospital along Adebayo Road, for the Pro-Buhari and Pro-Fayose
rallies.

While a greater number of the N-Power beneficiaries displayed placards
campaigning for Governor Ayodele Fayose and his deputy, Prof Kolapo
Olusola, a few others displayed two banners supporting President
Buhari.

Security men were however on ground to ensure that the walk was without rancor.

Drama however occurred at a popular event centre where accreditation
for the programme was done when officials of N-Power tried to prevent
those loyal to Governor Fayose from entering the venue, but they were
overwhelmed by the huge crowd in support of Fayose and they eventually
forced their way in while the security officials ensured there was no
exchange of physical assaults from either party.

Explaining why the beneficiaries loyal to Fayose joined in the rally,
Ajibade Segun, a beneficiary who was among the Pro-Fayose and Prof
Olusola beneficiaries said: "A few months ago, Mr. Governor, His
Excellency, Dr. Peter Ayodele Fayose invited us to the government
house and promised those of us who are N-Power beneficiaries in Ekiti
that we would get permanent employment from the state government. This
is why we are happy and we are now coming out to campaign for the
Deputy Governor Olusola Kolapo.

“We are here supporting the continuity agenda of Governor Fayose and
supporting Prof Olusola for governor in July 14.

"To the president we are saying that we don't want just a temporary
relief in the name of N-Power from massive unemployment in Nigeria, we
want permanent employment.

“We also want the number of beneficiaries of the N-Power in Ekiti to
be more than what we have presently. But most importantly, we want a
permanent job like the governor has promised to give a good number of
us.

“While we appreciate the gesture of the President, we want to make it
clear that it is not right for former Governor Fayemi to turn the
scheme to a political instrument as he tried to do today because we
know that today's event was organized to boast his political image.

“Fayemi's former Senior Special Assistant on Mobilization, Tope
Osatoyinbo is here leading the walk and we ask, is he an official of
N-Power? We have demonstrated to him today that he cannot use N-Power
to deceive Ekiti people, we are for Govenor Fayose and his continuity
agenda,” he said.