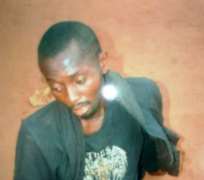 The Ogun State Police Command has arrested one Lekan Adebisi that killed two pupils of ST. John's Anglican school at Agodo in Ogun waterside on Monday.

The Police Public Relations Officer, Abimbola Oyeyemi told The Nigerian Voice that the suspect was arrested today through the combine efforts of the policeman attached to Ogbere area command led by ACP Makinde Kayode and the local hunters.

The suspect broke into the school's compound and killed two pupils of the school after which he ran away.

The Commissioner of Police CP Ahmed Iliyasu who was furious about the incident gave a matching order to the Area commander Ogbere and DPO Abigi Division to fish out the murderer within the shortest possible time.

In compliance with the CP's order, the area commander mobilized policemen and local hunters for the manhunt of the suspect.

Their efforts paid off in the early hour of today when the suspect was seen in a bush around the community. While they wanted to arrest him, the suspect who was brandishing a sharp cutlass attacked them consequence upon which he was shot and injured on the leg. He has been taken to hospital for medical treatment.

Meanwhile, the commissioner of police CP Ahmed Iliyasu has directed that the case be transferred to Homicide section of state criminal investigation and intelligence department for proper investigation.