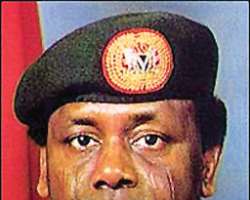 Gen. Sani Abacha
Two sons of the late Sani Abacha Mohammed and Abba, on Wednesday dragged the federal government before a Federal High Court, Abuja challenging the circumstances under which a criminal case was initiated against them in Geneva, Switzerland.

In the suit, Mohammed and Abba, averred that the statements used as evidence against them in the court were not obtained legally by the government's Special Investigation Panel.

But the Federal Government, in its defence, had challenged the competence of the suit, describing it as 'frivolous, utterly baseless and completely misconceived.'

In the Originating Summons, in which 24 corporate bodies were listed as plaintiffs, the plaintiffs prayed the court to restrain the Federal Government from providing mutual assistance or request for mutual assistance to any country based on the evidence (oral or documentary) obtained by or under the investigations of the SIP.

The Attorney-General of the Federation and Minister of Justice, Mr. Mohammed Adoke, is the sole defendant.

During the investigation, statements were obtained from the Abacha family by the investigative panel led by an Assistant Commissioner of Police, Peter Gana.

However, Mohammed and Abba said they 'were not informed that the true purpose for which their statements were sought was to provide evidence for an investigation and their possible prosecution by the states of Jersey, the Authorities of Leichtenstein, United Kingdom, Luxembourg, France, the Bahamas and Switzerland.

'The plaintiffs were not advised on their right to consult a legal practitioner of their choice before making statements' before the SIP.

'No caution whatsoever was administered to the plaintiffs prior to the making of statements before the Deputy Commissioner of Police, Peter Gana.'

They also want the court to restrain the defendant from bringing or continuing any civil or criminal proceedings in Nigeria of foreign jurisdictions against the Plaintiffs based on the statements.

The claimed that a former AGF, Mr. Kanu Agabi (SAN), in line with Decree 53 of 1999, had written the Swiss Authorities on November 1, 1999, saying 'no civil or criminal proceedings shall be instituted in any court against them in Nigeria.'

The Abacha family said, 'Following the promulgation of Decree 53, the work of the Special Investigation panel came to an end.'

But the government through a Notice of Preliminary Objection brought pursuant to Order 29 Rule 1 and 2 of the Federal High Court (Civil Procedure) Rules, 2009 and Section 2 of the Public Officers Protection Act CAP P41, 2004, has asked the court to dismiss the suit.

It said the suit was statute barred because it was not filed within three months that the cause of action arose, adding that the court lacked the jurisdiction to hear the suit.

However, no date has been fixed for the hearing of the case. While Eunice Ejiga is representating the Abacha family, Mr. Godwin Obla is the Federal Government's lawyer.