Okorocha, Uche Nwosu & Fcc Jones: Group Of Men On A Mission To Destroy Apc In Imo 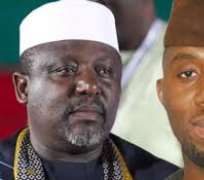 In Igbo parlance, it is said that, "eme onye ara conductor, ya efegbuo onwe ya n'aka" meaning, " when you make a fool a motor conductor, he makes mess of the whole job". I am not comfortable engaging one FCC Jones into this article because I may be giving him an undue prominence.

But looking at the way the said fool, Fcc Jones has mesmerized and bastardized the image of the ruling All Progressive Congress (APC) in Imo State, a caring media fighter would not but do everything humanly possible to either disclaim him or review his irresponsible attitudes and altitudes.

My main problem is not the young fool, Fcc Jones but my headache lies on the sudden billionaire, Chief Uche Nwosu who engaged him in the unprofessional job to demarket APC in the state. Going by their utterances, I am forced to believe that Chief Nwosu's plan is to use Fcc Jones and his likes to destroy APC in Imo State and subsequently dump the party for ACTION ALLIANCE (AA), a party solely owned and financed by Governor Rochas Okorocha for his 2019 Governorship bid having understood that the APC door has been shut against him.

Obviously, you cannot push a person and still shows him where to fall, the actions of Chief Nwosu and his media hirelings indicate that they have no specific direction in their GUBER ambition, hence they have continued to malign and attack individuals they consider threat to their interest. Shamefully enough, these crop of nonentities have intermittently maligned and rubbished a political party under which, they have dreamt of clinging the number one seat in the state.

World over, election is viewed as a game of strategy, but in Imo State, politics is considered as a game of noise making and endorsement madness, who are the cause? The cause of these uncontrollable political charades are Governor Okorocha and his son-in-law, Uche Nwosu.

A situation where a man has said it openly that "whoever that is fighting Uche Nwosu's ambition to become Governor in 2019 is as well fighting God" is the height of an insignificant comment ever made by a mortal being who maybe, has assumed a position of God before his people.

The Bible says, "My son, do not take my position but call on me in time of trouble" but in this case, Governor Okorocha and his son-in-law, Uche Nwosu have taken the position of God in deciding who occupies all political seats in Imo State. To display their desperation, they have continued to withchunt whoever that identifies with people opposed to their selfish desires to occupy Imo in 2019. One of their latest victims is, Ichie Uche Best Mbanaso who was hastely and rudely sacked of his position for being part of the Imo APC reformation group that endorsed a communique at Imerienwe, Ngor Okpala LGA of Imo State.

Back to the theme, Fcc Jones having worked for the PDP for years as a propagandist, is suspected to have been deployed by his former employers in connivance with Uche Nwosu to demarket APC in the state, with a view to positioning him for Governor under his father-in-laws' Action Alliance.

I do not care if you take my position or not but what I believe is that every story must have emanated from somewhere. Last time, I raised a breaking news about fracas at Mbaitoli over a purported endorsement of a sudden billionaire, some people ignored it, raised that of spiritualists at Concorde Hotel, few days ago, I raised another breaking news over an attack on Archbishop AJV Obinna at Ngwoma by Uche Nwosu and his Ugwumba Movement hirelings. But one thing is remarkable that all these stories had always turned out to be true, and this has made curious minds to take my breaking news or articles very seriously.

I may not know the next Governor of Imo State in 2019 but I am unequivocally convinced and aware that Uche Nwosu cannot be Governor of the state in 2019. Quote me.

Austin Chikwado writes from Owerri, the capital of Imo State