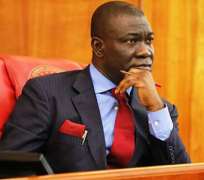 he Nigerian government has written to the authorities of the United Arab Emirates (UAE), United Kingdom and the United States of America after discovering hidden assets owned in the three countries by Nigerian Deputy Senate President, Ike Ekweremadu.

In the letters written to the UAE and USA, Mr. Fowler is relying on the Automatic Exchange of Information (AEoI), a multi-jurisdictional instrument for exposing hidden assets and incomes, to which Nigeria is a signatory. The AEoI, which kicked in Nigeria on January 1, was conceived to stop illicit financial flows.

Mr. Ekweremadu’s properties in the UAE were exposed by a whistleblower. In the country, the Deputy Senate President owns eight properties. Among these are Apartments EGG1/1/114 and EGG1/1/115 Emirates Garden, Apartment DFB/12/B 1204 Park Towers, Flat 3604, MAG214 and Villa No.148, MAEEN1 The Lakes, Emirate Hills. The others are Boulevard 3901, two flats of Burij Side Boulevard, The Signature; and Room 1903, Hotel Downtown.

In respect of Mr. Ekweremadu’s properties in the United Kingdom, President Muhammadu Buhari through one of the Special Assistants wrote to the Serious Fraud Office and is relying on the recently passed Unexplained Wealth Order (UWO) in the country. The order prescribes forfeiture of assets valued at 50,000 pounds and above for which the owner cannot adequately explain the source of income with which it was acquired.

“The objective of this letter is to alert you of this development in view of the Voluntary Declaration of Assets and Income Scheme introduced by the Federal Government,” stated Fowler in the letter.

The letter to the US government was addressed to the Financial Crimes Enforcement Network (FinCEN) under the United States Justice Department. A copy of the letter was also sent to Tunde Fowler, Executive Chairman of the Federal Inland Revenue Service in Abuja.