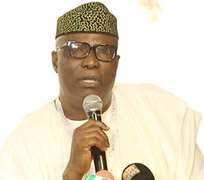 Special Assistant to the Ekiti State Governor on Public Communications
and New Media, Lere Olayinka has described the Special Adviser
(Political) in the office of the Vice President, Senator Babafemi
Ojudu as “a scammer, who is only using his declaration to contest the
July 14, 2018 governorship election to raise funds from unsuspecting
members of the public knowing that he won't even come near the All
Progressives Congress (APC) ticket.”

He challenged Ojudu to tell Ekiti people one benefit that was derived
from his four years as a senator, saying; “Today in Ekiti, it can be
said of Governor Ayodele Fayose that he constructed the first flyover
bridge, modern markets, modern high court complex, dualised roads,
governor's office, among others in Ado Ekiti. What did Ojudu and his
party do?”

Olayinka, who was reacting to statement made by Ojudu at his
governorship declaration in Ado Ekiti today, that he would probe the
government of Ayo Fayose, if he is elected governor of the Ekiti
State, said; “Even though Governor Fayose is not afraid of being
probed by anyone, it is laughable that someone like Ojudu, who did
nothing for Ekiti State as Senator for four years and was not bold
enough to seek reelection because of fear of losing scandalously is
the one talking about probing the governor.

“It is on record that Senator Ojudu was the only one who did not seek
reelection in 2015 out of the three APC senators in the State then and
it was because he was not even sure of getting votes in his family
compound in Ado Ekiti that chickened out.”

The Governor's Spokesperson said Senator Ojudu should be ashamed of
the number of people that attended his declaration, adding that;
“Branded materials, banners and posters were even more than the people
who were at the declaration and his (Ojudu) disappointment was so
glaring while delivering his prepared speech.”

On Senator Ojudu's claim that Governor Fayose imprisoned a monarch in
Ikere Ekiti, Olayinka said “the governor is neither the police that
has powers to arrest and detain suspects nor the court that can remand
suspects in prison custody. Therefore, how can a supposed educated
person like Senator Ojudu mount the podium and claim that Governor
Fayose imprisoned anyone, not to talk of a monarch?

“Fact is that Senator Ojudu is the number one enemy of Ekiti State and
its people. He is always working towards causing political instability
in the State. If not, he should be aware that even the Ekiti State
Council of Traditional Rulers has said that the Olukere of
Ikere-Ekiti, is not a recognised royal stool and that the description
of the occupier of the seat, Olukere Ganiyu Obasoyin, as an oba is 'an
aberration and anomalous.'

“It is on record that two days ago, the chairman of the council who is
also the Oloye of Oye Ekiti, Oba Oluwole Ademolaju, addressed the
press citing the provisions of the Ekiti State Chiefs Law, Cap C5 v
and advised Obasoyin to wait for the conclusion of the processing of
his application.”

Olayinka, who advised Senator Ojudu to face the uphill task of
securing the APC ticket before threatening to probe anyone, added
that; “Even with his sparsely attended declaration of today, it should
be clear to discerning minds that Senator Ojudu is only in the
governorship race to enrich himself.”