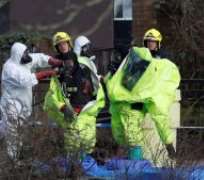 British lawmakers have voiced their anger over the “brazen and reckless” attempted murder of a former spy using a deadly nerve agent, with one accusing Russia of having potentially committed an “act of war.”

Former spy Sergei Skripal and his daughter, Yulia, remain in critical condition in the hospital after they were found unconscious on Sunday as a result of being exposed to an as-yet unspecified nerve agent. The police officer who first responded to the scene, who had been in intensive care, is now “stable and conscious” and has been named as Sergeant Nick Bailey.

Local newspaper the Salisbury Journal reported that police had cordoned off the graves of Skripal’s wife and son, appearing to confirm previous reports that their deaths are now part of the ongoing investigation by British counter-terrorism police. Liudmila Skirpal died of cancer in 2012, and Alexander Skripal died in St. Petersburg last year.

As speculation mounted that Russia was responsible for the attack, the British government’s Home Secretary, Amber Rudd, said: “The use of nerve agent on UK soil is a brazen and reckless act. This was attempted murder in the most cruel and public way.”

But she added: “If we are to be rigorous in this investigation we must avoid speculation and allow the police to carry on their investigation. The investigation now involves hundreds of officers following every possible lead to find those responsible.

“We are committed to doing all we can to bring the perpetrators to justice, whoever they are and wherever they may be. As the Foreign Secretary [Boris Johnson] made clear, we will respond in a robust and appropriate manner once we ascertain who was responsible.”

Both Rudd and Prime Minister Theresa May refused to be drawn into questions over Russian involvement on Thursday. In a session in the British Parliament, Rudd repeatedly swatted away questions from lawmakers, both from her own party and the opposition, about what the government’s retaliatory measures would be if Russia was implicated. Putin's Re-Election Strategy: Nukes and Assassins

Conservative MP Sir Edward Leigh told Rudd: “The circumstantial evidence against Russia is very strong. Who else would have the motive and the means? … Those of us who seek to understand Russia know that the only way to preserve peace is through strength If Russia is behind this, this is a brazen act of war, of humiliating our country.”

Labour MP Ben Bradshaw said: “[We] have warned for several years about the growing threat of the terrorist Russian state under President Putin whether it’s money laundering in the City of London, targeted murders, … and the interference in our political and democratic system.”

Rudd insisted that the government had “not been asleep at the switch as to where our international enemies are,” saying Britain has been vocal over its opposition to Russia’s actions in Ukraine and Syria. She said the government would “go further if we needed to do so.”

Russia has continued to vociferously deny any involvement in the attempted murder after the Russian Foreign Ministry rejected the “groundless” speculation on Wednesday. The unusually-outspoken Twitter account of the Russian Embassy in London spent Thursday correcting reports that called Skripal a Russian spy, insisting he was a British one who worked for MI6 .

The account also tweeted: “When Boris Berezovsky and Alexander Perepilichny died in Britain, there was a lot of speculation in the media, then all the conclusions were classified, and no data provided to Russia. Same happening now, with MI6 agent Sergei Skripal poisoning.”

Although British police officially declared Perepilichny and Berezovsky’s deaths non-suspicious, a BuzzFeed News investigation from last year claimed that the British government suppressed evidence that Russia was responsible for both deaths and seven others.

The Russian Embassy account also complained of “Russophobia” from a British lawmaker who had pointed the finger towards Russia.

Counterterrorism police continued their investigation on Thursday with a fingertip search of Skripal’s home as hundreds of analysts and detectives worked to reconstruct his movements before he was found collapsed with his daughter on a bench outside a shopping center.

A source on the investigation told the BBC the nerve agent used was likely to be rarer than the sarin gas which is thought to have been used in Syria or the VX substance used to kill Kim Jong Un’s half brother last year.

When Rudd was asked outright if she believed the poisoning was a Russian assassination attempt, she said: “I'm determined to wait before any attribution [is made] until we have the facts. I'm completely confident that the police will be able to get that.”

Police again appealed to potential eyewitnesses to get in touch.