Tinubu's Alpha Beta not a consultant in Land Use Charge law: Lagos Assembly 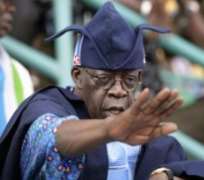 The Lagos State House of Assembly on Wednesday denied the existence of a private company, Alpha Beta, as a consultant in the state's Land Use Charge Act.

Mr. Tunde Braimah, a member of the assembly and also chairman, House Committee on Information, Publicity, Strategy and Security said the company does not exist in the bill as passed by the assembly and as endorsed by Governor Akinwunmi Ambode.

The News Agency of Nigeria (NAN) reports that critics of the law in the social media have castigated the Lagos State Government for inserting Alpha Beta, owned by the former governor Asiwaju Bola Ahmed Tinubu, as a consultant to be engaged in verification of land use payments to the state.

The section of the law was said to read: “Alpha Beta or any other designated person(s) or corporate body who has the responsibility of monitoring the incoming revenue of the state through the collecting banks, shall provide a report to the Accountant-General of the State”.

Braimoh said the clause being cited must be fake.
“As far as we are concerned, we don't know how it (Alpha Beta company) got there. It didn't emanate from us and our own clean copy does not have anything like such.

“Where did the critics get their copy from? They may be branding an unofficial document. It is not the correct version of the law we have.

“We are not aware of the copy with that controversial insertion. We don't recognise that copy that the people are arguing about. There is nothing like that in the copy in our hands.”

The lawmaker, representing Kosofe Constituency II at the Assembly urged the people to wait until the law was properly and officially cited and have its own peculiarities in form of identification by way of direct number.

According to him, the law as at now is still undergoing processes of final perfection.

“It is when the law is cited and gazetted that it will be officially accessible to everyone; that is when we can say this is the law of Lagos State.

“As at now, after the assent of the governor, the law will have to undergo the process of gazetting, which is the stage it is now.

” Meanwhile, we did not see anything like what critics were saying in the copy available in government custody.

“If people saw a private company as consultant, we did not know where they got their copy from, it could be a manipulated copy,” he stressed.

He urged the critics to wait for the gazetted copy which would be the correct documented copy of the law that emanated from the government.

NAN reports that the executive bill, which was recently passed into law and assented to by Gov. Akinwunmi Ambode, had been generating controversies and criticisms from different quarters in the state. (NAN)