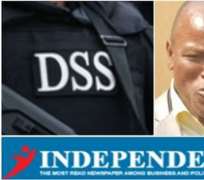 Nigeria’s domestic intelligence agency, the Department of State Services (DSS), called in Ezimakor for questioning on February 28 at its headquarters in Abuja in relation to an article he wrote about the release of the Nigerian schoolgirls, known as the Chibok girls, who were captured by the militant group Boko Haram in April 2014, according to media reports and the journalist’s lawyer Douglas Ekhator.

In the article, Ezimakor wrote that President Muhammadu Buhari’s administration had paid millions of dollars in ransom to Boko Haram for the release of some of the kidnapped girls . The Nigerian government has denied paying ransom to insurgent groups, according to Ezimakor’s article.

Following the questioning, the DSS detained Ezimakor. The journalist is still being held by the DSS without charge, beyond the three days provided by Nigerian law, Ekhator told CPJ.

The lawyer told CPJ that DSS agents threatened Ezimakor with terrorism charges if he refuses to reveal his sources to DSS.

“Nigeria’s intelligence agency must stop trying to force Tony Ezimakor to disclose his confidential sources,” said Angela Quintal, CPJ’s Africa Program Coordinator, from New York. “Ezimakor must be released from detention without condition and allowed to continue investigating alleged corruption without fear of reprisal, including being forced to violate his journalistic ethics,” she said.

CPJ’s repeated attempts to contact DSS Director-General Lawal Musa Daura, the DSS’s Director of Operations Gbeteng Bassi, and President Buhari’s special adviser on media and communication, Femi Adesina, on their cell phones and on their office landlines were unsuccessful.

Ezimakor has refused to disclose his sources, and asked to be arraigned before a court if there was any evidence against him, said Ekhator.

Ekhator told CPJ on March 5 that Ezimakor was in poor health and suffered from high blood pressure. “He is under immense pressure to admit he lied and to agree to retract the story,” the lawyer told CPJ.

The Nigerian Union of Journalists (NUJ) has called for Ezimakor’s unconditional release, according to media reports .