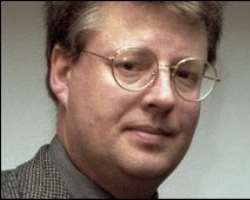 Stieg Larsson died in 2004 after suffering a heart attack

Two short stories by Stieg Larsson, the author of The Girl With The Dragon Tattoo, have been found six years after his death.

Larsson wrote the two sci-fi stories aged 17 but they were rejected by Swedish magazine Jules Verne.

The stories, titled The Crystal Balls and The Flies, were unearthed by the Swedish National Library.

Larsson died in 2004 aged 50, a year before the first of his Millennium trilogy crime novels was published.

'Tentative efforts'
He had originally planned to write 10 books in the series and was halfway through the fourth when he died.

The Girl With the Dragon Tattoo, The Girl Who Played With Fire and The Girl Who Kicked The Hornet's Nest have gone on to sell more than 20 million copies worldwide.

In the covering letter to Jules Verne magazine, Larsson described himself as “a 17-year-old guy from Umea with dreams of becoming an author and journalist”.

He called the science fiction stories his “first tentative efforts” at writing.

Library spokesman Hakan Farje said it received the stories as part of a private donation of the magazine's archives in 2007.

He added it was up to the author's heirs to decide whether to publish the stories.