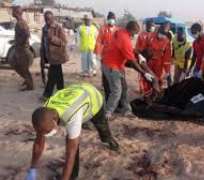 No fewer than 3 members of the Civilian Joint Taskforce ( CJTF) were on Tuesday confirmed dead while 17 others sustained various degrees of injuries when a male Suicide bomber attacked Muna-datti area of Jere Local government in Borno state.

Confirming the attack in a statement , the Borno state Police Public Relations Officer , DSP Joseph Kwaji said the dead and injured were evacuated to the Universty of Maiduguri Teaching Hospital ( UMTH) while normalcy has been restored in the area.

” On 05/03/2018 at about 2030hrs , A male suicide bomber riding on a bicycle detonated IED strapped to his body at Muna Datti area, killing himself and Three Civilian JTF members while 17 people were injured. The Scene was visited by EOD and patrol teams.

” The dead and injured were evacuated to UMTH Maiduguri. Normalcy has been restored , please,” DSP Kwaji said.

It will be recalled that the Muna-garage area as well as Molai along Damboa road has been the entry points through which Boko Haram terroriststs sneak in to wreck havoc on Civilian populace hence the need for the security agencies to comb the areas to ascertain the identity of Persons residing in the areas.