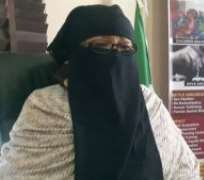 Members of the Boko Haram sect that have sent thousands to their untimely graves are ready to surrender, founder of the Complete Care Aid Foundation, Aisha Wakil, has said.

Popularly called Mama Boko Haram, Aisha, however, said their apprehension was how they would be reintegrated into society.

Her assertion came as parents of the 110 abducted girls of Government Technical College, Dapchi in Yobe State are losing their cool by the day as their children spent 13 days in captivity.

In an apparent loss of confidence in the authorities, they have resolved to take their destinies in their own hands by forming the Dapchi Abducted Girls Parents Association.

Wakil, who is a major negotiator for the sect, told Sunday Tribune that she could vouch for their readiness to drop their arms and embrace peace.

“I was shocked, like every other Nigerian, as same history has repeated itself like Chibok girls. I enquired and I was told that it was Habib and co who took the girls.

“This is not Habib's habit, son of Mohammed Yusuf. I know he is with Maman Nur one of the peaceful groups of Jamatul Ali's Sunna, Liddawati Wul Jihadi. Nur, Habib and group are people with less violence.

“Why these Dapchi little girls were taken by them left me with shock. I know, believe and trust that they won't hurt them or hold them long. This group I can beat my chest and tell the world that it needs peace and it wants to stop.

“These kids are not heartless people. May Almighty Allah touch the hearts of these dear sons so that they could stop. The whole world is watching. What are they afraid of? Who will touch a surrendered fighter? Do they think the world and I would not be there for them?

“Dear sons, my knees are on the ground, my hands up to Allah, begging all of you to stop. Try me your mum, just come out with the girls, please don't do havoc again. From the deep of my heart, I beg with motherly love and tears.

“Stop and don't let your sisters stay too long. We are not praying for future occurrences. We need the fight to end peacefully. Every individual in the country, mosques, churches, states the whole country should engage in praying. Stop blaming anyone. I believe if we pray more, God will pour down His grace on us, Nigeria will be better again,” Aisha said.

Some of the parents, who spoke with newsmen in Damaturu, also vowed to lay down their lives by going after the insurgents with vigilantes, rather than ignore the struggle for the Federal Government which is responsible for security and defence matters.

But Bashir Manzo, who chairs the association of the affected parents, told Sunday Tribune that he would rather wait for any strategy the governor, who is the chief security officer of the state, would adopt, in conjunction with the Federal Government, to get back their kids.

The chairman said he and his colleagues were the ones with the authentic list of the missing girls, adding that the 84 announced by the government was still suspect because the managers of the school did not tell the governor the truth.

The formation of the association, according to him, is to ensure justice is done in their struggle in actualising the return of the girls.

“One area the parents and the community were concerned was the circumstances surrounding the abduction after the withdrawal of security operatives in Dapchi days before the attack.

“It pains them so much; even the governor is pained by it,” he said.

Another issue of concern to the parents was the arrest of three of their members for allegedly attacking the convoy of the governor the day after the incident.

The parents were of the opinion that the governor might have been wrongly informed about the true situation of the abduction saga.

They demanded that the girls should be rescued so that peace would be restored in the school environment. (Sunday Tribune)