Olubadan Promises To Intervene In OPC Crisis, To Meet Prominent Yoruba Obas On How To Harmonise Factions Into One 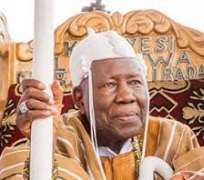 The Olubadan of Ibadanland, Oba Soliu Adetunji (Aje Ogunniso 1) has promised to meet prominent Yoruba Obas on how to harmonise various factions of Oodua Peoples Congress into one.

The Royal father stated that the current polarisation of the group into many factions will not augur well for the peace and development of Yorubaland, promised to meet other prominent Yoruba Obas on how to harmonise various factions of OPC into one.

Olubadan who commended Comrade Adeshina Akinpelu on his visit to the palace, also urged all OPC members to always maintain peace in Yorubaland.

"I want to commend you on your visit and I assure you that I will look into all the issues you raised while speaking. I will speak to other other prominent Obas in Yorubaland on how we can harmonise all factions of OPC into one."

While speaking on his visit to the palace of Olubadan, Comrade

Adeshina Akinpelu stated that the purpose of his visit to the palace was to pay homage and also intimate Olubadan of the need to use his influence as first class Yoruba Oba to harmonise all OPC factions into one and also to prevent any faction of the Oodua Peoples Congress, OPC from participating in the forthcoming Oke Badan festival.

Akinpelu stated that his group has uncovered plans by a faction of OPC to use the the Oke Badan festival to foment trouble.

"As I'm talking to you, your Royal Highness, OPC New Era and OPC Reformed are working together. We want OPC to become one and that is why I'm appealing to you as a foremost Yoruba Oba in Yorubaland to use your office to harmonise various factions of OPC into one." Akinpelu also appealed to all royal fathers in Yorubaland to convene a meeting that will put an end to the crisis among all factions of the Oodua Peoples Congress. "Owing to frequent attacks by Fulani herdsmen in Yorubaland; there is need to harmonise all factions of OPC into one. OPC New Era has already started this harmonisation process and we urge other factions of OPC to give room for this harmonisation if truly they have the interest of Yoruba people at heart."