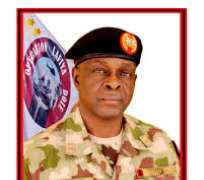 The attention of Theatre Command, Operation LAFIYA DOLE has been drawn to unfortunate mainstream and social media reports (Not The Nigerian Voice) and insinuations that troops advance at the ongoing Operation DEEP PUNCH II was deliberately halted to allow the escape of the purported factional Boko Haram terrorists group leader, Abubakar Shekau in Sambisa forest. This is not true.

Though the Theatre Command considers this misinformation as very laughable, it is quite disheartening and capable of dampening the morale of troops who are working round the clock to fight the terrorists in north eastern Nigeria. It is therefore expedient to respond to these insinuations.

A statement issued Friday by Colonel Onyema Nwachukwu, Deputy Director, Public Relations, Theatre Command Operation LAFIYA DOLE said that contrary to these mischievous allegations, no such order or directive was given by anybody to any of the units and formations on that operation.

This spurious allegation is most unfortunate and wake up call for the public to be very wary of agents of destabilization that are determined to thwart our efforts of clearing the remnants of Boko Haram terrorists hibernating in nooks and crannies of Sambisa forest and the Lake Chad islands.

The ongoing Operation DEEP PUNCH II, which is aimed at clearing Boko Haram insurgents from the Sambisa forest and the northern fringes of Lake Chad region, was planned to be executed in phases.

It is a phased operation and therefore requires that at a predetermined point or stage, troops will be halted either preparatory to transiting to another phase or outrightly transiting depending on the threat situation.

Secondly, during the operations, troops advance could be halted when vehicles or other mobile equipment are bugged down due to the difficulty of the terrain and for recovery purposes.

More also and very importantly too, in military operations avenues are deliberately provided for troops to habour, where they rest and carry out refitting of weapons and other equipment before resuming the operations.

Additionally, booby traps and land mines could also compel an advancing troop to halt to enable some specialized squad, scout and assess the situation before movement resumes.

These and several other factors could precipitate the halting of troops during operations.

It is therefore very appalling and unimaginable that a fundamental operational procedure could be misinterpreted and be mischievously used as a psychological weapon to indirectly dampen the morale of our troops.

The Theatre Command is seriously taken aback by this phony publication and considers it a psychological warfare on troops of Operation LAFIYA DOLE.

Consequently, members of the public are please enjoined to discountenance this misinformation as it is untenable and does not reflect the strong chararacter and courageous disposition of troops of Operation LAFIYA DOLE.