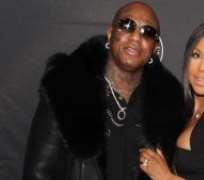 Wedding bells are chiming on the horizon for Toni Braxton and Birdman.

The 50-year-old singer and the 49-year-old rapper are engaged!

Rumors of their engagement began swirling weeks ago when the “Un-Break My Heart” singer was spotted wearing some shiny new hardware on her ring finger. However, Braxton confirmed the news on Facebook on Monday.

Sharing a new teaser for her WE tv reality series Braxton Family Values , the songstress is seen sharing the exciting news with her loved ones.

“I have an announcement to make,” she teased her excited family. “I’m engaged!”

The news is seeming welcomed by Braxton’s sisters, and the singer also gives fans a look at her new, enormous engagement ring.

Their lives may change, but the sisterhood remains the same. #BFV is back in March!

Braxton and Birdman (whose real name is Bryan Christopher Williams), began dating in May 2016 and made their first public appearance together at the BET Awards later that year. Braxton was previously married to musician Keri Lewis for 12 years. The couple, who divorced in 2013, share two sons — Denim, 16, and Diezel, 14.

Last year, Braxton admitted that she was “anxious” over her burgeoning relationship with the rapper during an episode of her reality show.

“I haven’t been happy in a long time outside of work. Work brings me extreme happiness. When I’m on stage and I’m performing, that’s the only time that I get those butterflies and I feel totally happy with my life,” she shared. “A romantic relationship? I haven’t had time for that — I should say, I chose not to make time for it, but it’s right here in front of my face: happiness.”