Some Notes on  Germany  and   Nigeria 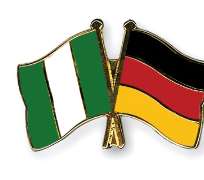 London,England .Germany and Nigeria have the largest economies in Europe and Africa respectively. The German day of Unity is October 3 whereas the Nigerian day of Independence is October 1. Germans and Nigerians excel in Mathematics, Science ,Engineering , Technology, Sports and Culture. German Pope benedict was head of 1.2 billion Catholics whereas Obasanjo by virtue of being the President of Nigeria the worlds most populous black country had been referred to as the torch bearer of i.2 billion blacks world wide.

Wrote his Phd titled the people and the house of God in Augustines Doctrine of the Church whilst Obasanjos thesis is titled:Resolving the unfinished Agenda in Liberation Theology; Leadership,Poverty and underdevelopment in North eastern Nigeria.

Benedict was Pope for 8 years and Obasanjo was President for 8 years.

Benedict was consecrated Arch Bishop of Munich and Fresing on 28 may 1977 whereas Obasanjo was sworn in as President on 29 may 1999.

THE Late Dora Akinyuli,then Nigerian Senatorial candidate and Doro(thea ) Merkel the Present German Chancellor were born July 14 1954 and July 17 1954 respectively Both women bagged Doctorate Degrees,Akinyuli in Pharmacy and relatedly Merkel in ChemistryBoth Women served as ministers in the federal Cabinet on their resoective countries.Both women have been featured in the Forbes list of powerful women.

Oby Ezekwesili co founded transparency Inernational in Berlin Germany.She has been listed by the Albert Einstein foundation as one of the 100 top visionaries of her generation to mark the 100th anniversary of the presentation of Albert Einsteins General theory of Relativity then in Berlin on November 25 1915.This same day November 25 1915, Chief Mrs HID Awolowo was born she became first lady of western Region in Ibadan like Berlin the political capital of Western Nigeria and the cultural capital then of Nigeria.Interestingly Oby Ezekwesili was invited to give the first HID Awolowo Memorial Lecture. The Nigerian President would be sworn in on May 29 1919 the 100th anniversary of the confirmation of the General Theory of Relativity.

Albert Einstein and Wole Soyinka, the first Obafemi Awolowo Leadership Prize winner are both Nobel prize winners, both composers,both associated with the unconventional, Einstein loved sailing and Soyinka is a self confessed Seadog.Einstein was born in Ulm(three Letters) Soyinka Born in Ake(Three Letters)Einstein was in Berlin, Soyinka was in Ibadan..

Max Planck and Sam Bajah were Physicist and Chemist respectively.Planck was the recognised head of German science and Bajah was honoured for his distinguished service to science world wide,Planck was born April 23 1858 and Bajah April 24 1934 Planck and Einstein parted ways. Bajah was interred on march 14 2008 the anniversary of the birth of Einstein. Bahah Paased away on Feburary 23 2008,three days to the 60th anniversary of the founding of the Max planck society for the promotion of science. Planck retired from the University of Berlin and Bajah Retired from the university of Ibadan. Berlin