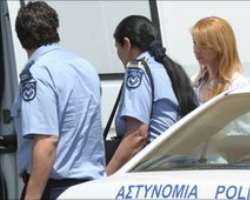 Elena Skordelli (right) is a well-known TV host
Cypriot prosecutors have begun presenting evidence against a TV host, Elena Skordelli, accused of ordering the murder of a boss who sacked her.

The glamorous 42-year-old media star is alleged to have paid for the contract killing of the millionaire head of the Dias media group, Andis Hadjicostis, who was shot in January.

Her brother, Tassos Krasopoulos, 37, is also a defendant in the trial.

They have pleaded not guilty to murder and conspiracy to murder.

Along with a third defendant, they could face a life prison sentence if convicted.

A fourth suspect who allegedly carried out the shooting of Mr Hadjicostis outside his house in Nicosia is believed to have fled Cyprus.

Prosecutors have alleged that the murder was motivated by the decision to fire Ms Skordelli.

They also say Ms Skordelli and her brother were trying to gain a majority stake in Sigma, the Dias station on which Ms Skordelli had her show. They currently hold 20% of Sigma shares.

As the trial got under way on Monday, prosecutors presented items including a crash helmet, closed-circuit TV footage, and shotgun pellets.

Observers say the alleged contract killing of a high-profile figure is unprecedented in Cyprus and that Cypriots have been gripped by the case.