He grabbed breasts, 'my thighs, my arms to pull me closer': Kate Upton 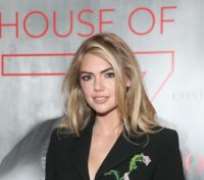 Model Kate Upton is further explaining the  sexual harassment allegations she made towards  Guess co-founder Paul Marciano , saying, “I'm not going to let him intimidate me anymore.”

Upton first made the claims in a Jan. 31 tweet that read, “It's disappointing that such an iconic women's brand @Guess is still empowering Paul Marciano as their creative director #metoo.”

She also shared the same message on Instagram, writing, “He shouldn't be allowed to use his power in the industry to sexually and emotionally harass women  #metoo .”

On Wednesday, the 25-year-old model gave a powerful interview to  Time , revealing abusive treatment from the fashion mogul, starting from when she was 18.

In a statement to Time, however, Marciano denied the allegations. “I have never been alone with Kate Upton,” he said. “I have never touched her inappropriately. Nor would I ever refer to a Guess model in such a derogatory manner.”

Marciano added, “I fully support the #MeToo movement . At the same time, I will not allow others to defame me and tarnish my reputation. I have pledged to Guess and its board of directors my full support and cooperation with a fair and impartial investigation.”

In the Time interview, Upton described her first day of work in July 2010 for a Guess lingerie campaign. “Paul Marciano said he wanted to meet with me,” she said. “As soon as I walked in with photographer Yu Tsai, Paul came straight up to me, forcibly grabbed my breasts and started feeling them — playing with them, actually. After I pushed him away, he said, 'I'm making sure they're real.'”

Upton continued, “Despite doing everything I could physically do to avoid his touch throughout the meeting, he continued to touch me in a very dominating and aggressive way, grabbing my thighs, my arms to pull me closer, my shoulders to pull me closer, my neck, my breasts, and smelling me. He then told Yu Tsai to leave us alone. I was able to send a quick text to Yu Tsai asking him to stay. He did, but that did not stop Paul's constant grabbing. I was extremely shaken, surprised, and scared.”

“At one point he forcibly grabbed the back of my head so that I could not move and started kissing my face and my neck. I remember not wanting to say 'Get off of me' because I didn't want to open my mouth to say anything because I didn't want him to be able to put his tongue in my mouth. I had two options: Do everything I could to wiggle away and avoid his pursuit, or punch the CEO of Guess. So I decided to just wiggle away.”

Upton described how Marciano “insisted” on walking her to her hotel room, but the photographer intervened. “I was so relieved and felt like I had barely escaped,” she said.

One month later, Upton accepted another Guess shoot and once in her hotel room, she says Marciano called “several times” asking to visit. “After several denials, I just turned off my phone and locked the door and tried to get some sleep,” she said. “I was terrified. All I could think was if he was able to get into my room it would not be good.”

The following day, Upton says she was fired from the shoot. “Someone had called my agency to say I had gotten fat and would not be needed on set [that day],” she said. “I was devastated, especially because at this point no one from Guess had even seen me.”

Still, Guess continued offering Upton work, and she agreed, asking her photographer friend to intervene. “We came up with a plan that anytime Paul invites himself to my room, I would text Yu Tsai to be there so that I was never alone in a room with him. I was still very nervous and scared because clearly Paul was comfortable with touching me in front of him. But Yu Tsai assured me that he would look out for me, so that's what we did.”

Upton also suggested that Marciano played mind games, offering her work, but not booking her until the last minute. “It made me feel that if I cut off communication with him, I wouldn't be booked again,” she explained. “Paul's texting increased, telling me how excited he was to see me, that he wanted me to change in front of him so he could see my naked body getting into his clothes. He asked if I thought of him when I was posing sexy on set.”

She added, “All the language he used was extremely dominant and possessive. At one point, to avoid Paul coming to set, I told him my boyfriend was going to be there. He was absolutely furious at that. It was an emotional and nonstop battle of games, power struggles, and creative avoidance tactics.”

Kate Upton is opening up about her own #MeToo moment. (Photo: Getty Images)

After Tsai was fired, Marciano “retaliated,” says Upton. “That's when I worked with the photographer Ellen von Unwerth. Paul's behavior became much more aggressive without Yu Tsai there as a buffer. My denials to Paul had to be much more direct. Then I was told the morning of the shoot I was not needed on set and was fired again.”

Upton's final Guess shoot took place during which she alleges Marciano called her “disgusting” and spread rumors that she was drinking on set, which Upton denied. She said, “I was then told to leave because Paul had said, 'Get that fat pig off my set.'”

The model went on to work for Sports Illustrated , and in 2012, Guess reached out with a $400,000 gig — the company's highest offer ever, says Upton — which she cautiously accepted, and then refused at the last minute.

The supermodel says her experience with Marciano affected her self-esteem . “I constantly blamed myself after it happened: What am I doing to invite someone to treat me like that or grab me like that?” she said. “I wondered if it was how I was presenting myself or what I was wearing. I started slumping my shoulders to hide my breast size, wearing baggy clothes, started despising my own body.”

She adds: “Paul used his power to make me feel insecure and powerless, but I'm not going to let him intimidate me anymore. These men think they are untouchable, but times are changing.”