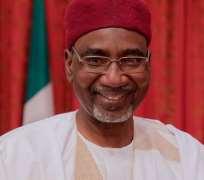 CIVIL SOCIETY ORGANISATIONS have asked President Mohammadu Buhari to immediately sack the Director General, Nigerian Intelligence Agency, (NIA), Mr Ahmed Abubakar. The groups said his case presents the worse narrative of having an incompetent, corrupt and disloyal Nigerian occupying one of the country’s most strategic positions.

The coalition said with Mr Abubakar occupying the post of DG, NIA, Nigeria will remain at its lowest water level in the international intelligence community.

The groups also linked the inability of the Federal Government to deal decisively against the armed Fulani herdsmen to the composition of top security positions by people of the same ethnic stock.

At a media briefing yesterday, the Civil Society Coalition for Mandate Protection, (CSC-MAP), a coalition of several civil society groups, called on President Mohammadu Buhari to specifically address the ugly situation where the top security positions are occupied by people of the same ethnic stock. The coalition called for the immediate removal of the DG NIA, Mr Ahmed Abubakar for incompetence and based on the chains of corruption charges against him. Abubakar, they argued should be taken before the Economic and Financial Crimes Commission, (EFCC) to face glaring cases of corruption leveled against him.

The CSC-MAP said the retention of the Director of the Nigerian Intelligence Agency, (NIA) Mr Ahmed Abubakar, as one of the sour points that portrays the government as ethnocentric. Nothing can be so glaring that the government is promoting tribalism, incompetence and favoritism like the grim images and drama surrounding the appointment of the DG of NIA inspite of public outcry.

The DG today has been confirmed to be one of the most incompetent individuals occupying very important positions. Today, many of the top security officials are occupied by people of the same ethnic origin. We suspect the fact that they have used their positions to promote ethnic hegemony. Abubakar was appointed inspite of his being a junior official and married to a Moroccan.

One of the most appalling developments was the appointment of Ahmed Abubakar as the Director General of Nigerian Intelligence Agency, (NIA). This was after a Yoruba man, Ayodele Oke was removed by the Presidency. This is a clear case of assault on Federal Character. There is no justification for this appointment. There is no basis for it. There are people of Yoruba extraction that should have been appointed into that position. There would have been no cause for alarm except that the clear case of subversion of the principles of fairness. In the first case, Mr Abubakar is not qualified for the position. He is married to a Moroccan which raised fundamental issues about loyalty to Nigeria as a country.

This is an indication that he is not qualified and yet he has been appointed by the Federal Government to occupy very strategic positions. It means that when security issues are being discussed, only one particular ethnic group is adequately represented in a plural society. Of all the 14 most important security positions occupied, none is from Igbo, the entire South-East and the South-South apart from the Chief of Naval Staff. The groups said the current composition is enough to set Nigeria on a ruinous path of deeper ethnic acrimony, discord and instability.

“The inability to deal with the perpetrators of violence in Nigeria is nothing but a reflection of the skewed appointments which favour one section of the country where the President comes from. This has brought a lot of bloodshed in the country. It has exposed Nigeria’s security structure and the danger of incursion of ethnic hegemony into critical state affairs”, the CSC-MAP in a chat with journalists on Wednesday. The press conference was addressed by the Deputy Executive Director of the CSC-MAP, Mr Taiwo Adeleye. The groups said all the important security positions are occupied by people of the same ethnic stock as the President. Others present included leaders of South West Progressives Youth Movement, (SWPYM), South West Students Movement, (SWSM), Nigerian Human Rights Community, (NHRC), Oodua Nationalist Coalition, (ONAC) representatives of several Pan Yoruba and Igbo groups.

The groups stated “In the North, Kaduna, Plateau, Adamawa, Taraba, Nassarawa and Benue have witnessed unprecedented blood-letting which is unprecedented. In Benue state, 73 people were buried in one day. They were killed by alleged Fulani herdsmen. Seven people were also killed in Gboko, allegedly by Tiv militia. Since this crisis began, the poor, the rich, the armed and defenseless have been victims. A Senator in Plateau, Senator Gyang Dan Tang was murdered in related ethnic clashes. A member of the Plateau House of Assembly, Gyang Fulani was also killed. In Taraba State, a member of the House of Assembly, Hosea Ibi was also killed.

The country’s now punctuated by series of cold blooded killings. These killings are perpetrated by civilians against themselves. In all these is the spiral impact of arms race whereby every community seems to struggle to acquire arms in the race for supremacy. There have also been revenge killings and these continue unabated. CSC-MAP said it is concerned that the Federal Government has demonstrated a clear case of cold complicity as indicated in the various statements accredited to the most important officials occupying some of the most strategic security institutions. We also notice a consistent pattern of top security officials taking positions that portray them as supporting a party in the raging conflict.

In the midst of this crisis, here is the statement made by the Defense Minister, Dan Alli Mansour: “If you go to Bayelsa or Ogun, you will see them (grazing routes). If those routes are blocked, what do you expect will happen?” Displaying his parochial interest, he added “Some people were caught with arms and they call themselves Forest Guards or whatever, with AK-47. There is nowhere in the country where arms are allowed to be carried apart from legitimate security forces.”

"While we are aware that part of the new DG’s agenda is to retire those of us who are his seniors, as it is more likely that he may not want to work with us, it is evident that he will pursue a vendetta mission, which he has already indicated in his very first address to us.He is at liberty to go ahead with what we know he intends to do, but we wish to point out the underlying dangers in a massive purge of senior officers of the agency, to the effect that, not only will the millions of dollars spent on training and retraining us be lost, we are also custodians of the country’s intelligence dossiers, and may decide to use same for mischief," said the disenchanted directors.

"Having failed promotion examinations to the directorship rank, which we can attest to and make bold to state that it amounts to administrative suicide to allow a practical misfit take over the agency and later mortgage same to his paymasters, who have ulterior motives," said the directors. "Since the government, itself admitted that Mr Abubakar was born and bred in Chad, while on the other hand, he claims to have been born in Nigeria; at least going by his the records and his CV, suffice it to point out that there is an obvious contradiction. We call upon this honorable body to thoroughly look into this seeming discrepancy."

We say without fear of contradictions that this lopsidedness cannot be isolated from the parochial posture of the top security operatives and the free reign of the Fulani herdsmen and the onslaught they continuously unleash on the people.