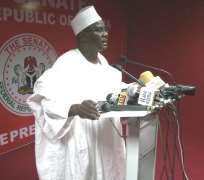 The former Senate Leader, Senator Mohammed Ali Ndume has called on the Federal Government to scale up funding of humanitarian activities and rebuilding process of the Northeast of Nigeria which was devastated by Boko Haram insurgency.

Senator Ndume who made the call while speaking at the Special Edition Town Hall meeting for military and security agencies in the Northeast, held at the multi purpose hall of the Government House, Maiduguri Monday.

Ndume who represents Borno South senatorial district at the National Assembly said that ," the FG only budgeted N45 billion for the rebuilding of the northeast compared to the international community that raised 750 million US dollars equivalent to N230 trillion , pointing out that, "if international community could raise this fund, I think the N45 billion is insufficient ".

The Senator also said there was need for synergy and coordination between the the federal, state and the Non Governmental Organisations NGOs to avoid reputation or duplication of activities and services by the NGO's and government in their programmes.

Senator from Borno Southat the National Assembly, Senator Mohammed Ali Ndume further appealed for more support and funding from the federal government and other agencies especially the international community while acknowledging the efforts and sacrifices of the Nigerian military in restoring peace in the state as well as other security agencies.

He also appealed to the government to support the state government resettle the IDPs back to their host communities and provide them with basic amenities and facilities among others especially women and children education facilities.

Ndume urged the federal government to intervene in the federal highways or roads dilapidation in the north east to ease movements of people and goods as well as services in the region while appreciating the support and role played by the members of the national assembly in the passage of the North East Development Commission Bill and President Buhari for assenting to the bill.

Senator Ndume however appealed for more funding of the PCNI and Bama Initiative among others to ease development and better the lives of the displaced persons.

Earlier while commending the Nigerian military for their gallantry, the Minister of information and Culture, Alhaji Lai Mohammed called on Nigerians to support and cooperate the with Military in the war against boko haram insurgents by being vigilant and report any information to the nearest severity outfits.

He said the holding of the meeting in Maiduguri was an indication that peace has return to Maiduguri.

Also in his address, Governments Kashim Shettima commended Presided Buhari, the military and other security agencies for liberating the state from Boko Haram occupations.

In his remarks, the Senator representing Borno North, Senator Abu Kyari called on the FG and the military to open roads and markets in the state to ease the restoration of civil authorities.