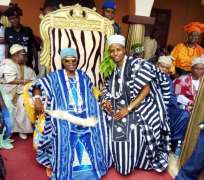 Some of the dignitaries include the Secretary to the State Governmen, Alhaji Moshood Adeoti, a judge of Osun State High Court, Justice Jide Falola, the Specil Adviser to Osun State Gobernor, Mr Rauf Aregbesola on Media and strategy, Mr Semiu Okanlawon and the Chairman of the Osun State Council of the Nigeria Union of Journalists (NUJ) Mr. Biodun Olalere (NUJ chairman). Others are Honourable Abdulgafar Akintayo Amere, Dr. Taofeeq Yinka Ayinde, Otunba Adebayo Waliyulahi Rovet and Engr. Mumini Olabanji among others.

Speaking on the occasion, Oba Akanbi said he has not given any honorary title to any one since he became the Oluwo two years ago, saying Professor Alamu, being the first to be installed by him as Asiwaju-Odo of Iwoland was chosen to serve as good example for the up and coming Iwo indigenes.

Oba Akanbi tasked Prof Alamu to use his wealth of experience to assist Iwo youths by guiding them right to actualise their goal in life and motivate them to be successful and for the overall development of Iwoland, Osun State and Nigeria. The Oluwo of Iwo, Oba Abdulrosheed Adewale Akabi and the former Vice Chancellor of Osun State University, Professor Jelili Oguntola Alamu during his installation as the Asiwaju-Odo of Iwoland by the Oluwo in his palace.

The monarch charged the new Asiwaju-Odo of Iwoland to make it clear to the youths in the community to stay with God and shun secret societies, saying that joining secret groups could jeopardize their future.

According to the Oluwo, "I installed you (Alamu) as the Asiwaju-Odo of Iwoland so that you will lead my children (youths) right. There are countless social menaces out there. The youths of Iwoland need someone that will lead them to the right path to success. They shouldn't join secret societies. I have been showcasing it as a father but Oluwo alone cannot do it. There is dire need for collaborative efforts to achieve this objective and I'm sure that with the installation of Prof Alamu, we will succeed in meeting this goal"

Oba Akanbi added, "Iwo is setting an unprecedented pace. The youth form 75% of the total country's population but they are politically disadvantaged in key appointment and elective positions. You must also get them engaged productively for brighter future."