The Irohinoodua Editorial: A floundering state and the Yoruba dilemma. 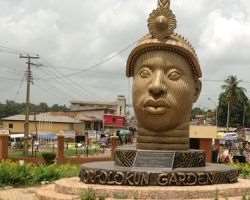 In recent history, it is doubtful if the Yoruba nation has ever faced such a ruinous quandary as things stand today. Since 1914, the Yoruba have found themselves lumped in an unjust, ungodly and eternally deceitful country. The gleam of hope that came in the 50s, during regional integration has faded like the evening sun. For decades, Yoruba nation has been constantly pummeled and put down, as against the standard of the 50s, 60s, and 70s, when culture, values, economic uplift stood in grandeur. Today, the nation faces a perilous future unless a radical intervention comes.

Fear, threats and trembling in the land.

The threats are real and stunning. No one ever expected this sudden downturn in political fortunes, at least, not in an extremely bizarre manner. The people remain traumatised for most part of the post-independence era, leading to a generation of men and women trapped in the wilderness of hopelessness and despair. 1999 return to democracy after years of agonizing military tyranny and mass killings of Yoruba rebels, marked by the conscious decimation of the economic foundation of the Yoruba people, has brought little gains. But there was high hope, even if not backed history, in 2015, that the alliance with the Fulani North would bring forth magnanimous harvest not just for the Yoruba nation, but for the good of the entire commonwealth. The All Progressives Congress, (APC) provided the springboard, backed by a lot of intellectual prowess, deployed-mainstream media, social media, infographics, money, all in the bid to edge out the equally visionless, inept and acrimonious Peoples Democratic Party, (PDP). The party was defeated, but the present platform appears not only to have inherited almost all the iniquities of the past, but to also add venom and lethal spices, never before seen.

We admit, President Mohammadu Buhari initially raised the stake in the fight against corruption. He launched intensive campaigns against Boko Haram. He has continued to live a frugal and disciplined lifestyle.

But all these fizzle out like a drop of water in the saucepan compared with his follies and obvious inability to manage a complex country. His first six months was like a crab walk, sluggish and tactless. This was partly responsible for the virtual collapse of the naira which he blamed on oil price surge, but the question remains why the currency deflation did not have the same catastrophic impact on other oil importing countries.

Still, the signs that Buhari wanted a government for his own people and a prelaunch of singularity domination came too early. For instance, in picking his Ministers and top aides, he deliberately pushed aside the Yoruba leadership bloc within the APC but rather sought loyalty to himself and his cabal by direct handpick of his rookies, a conscious scheme to undermine regional solidarity, break the Yoruba political unity, demystify and cut to size the very ladder on which he rode to the top in the first place. Today, the country is sliding down the cliff, almost in a calamitous speed. Apart from the economic decline, the regime relies more on figures to prove its achievements why the reality on the table speak of wretchedness and extreme hunger. Nigerians in a long time, have not seen such a skyrocket rate of suicides, the desperation of young people to die than to live in Nigeria as orchestrated by women and children that plunged into the Sahara desert daily, investing fortunes, all to escape the furnace at home. He surely inherited a shipwreck, but what is lacking is the clear evidence that the future will be better. The government lacks clear-cut vision on how to deal with the hydra-headed problems. This is compounded by his preference for a fiefdom that places primacy on primordial instincts where loyalty and skill are viewed from the prism of ethnic root and competence judged by cronyism. His topmost security Chiefs are of Fulani or Kanuri extraction-Mr Buhari’s mother is Kanuri. Given the public goodwill he enjoys, the country would have tolerated the parochial instinct if only the appointees were competent. But they rather appear to have been picked for only one reason: Preserve primeval heritage in a country that hosts over 350 ethnic nationalities of diverse values and civilisations.

Now, what are the threats? The first major threat is the consolidation of the imminent erosion of political freedom for the Yoruba nation. Elections continue to be “see and buy” which brings out the worst in us. For instance, the last election in Ondo State recorded some 500,000 naira used to bribe voters in one polling booth. There are strong suspicions on the streets that the regime is building a new network of alliances in the South West whose competence are based on their innate ability to betray to eat, and their innate ability to usurp the sovereignty of their own people. And there are nauseating intellectuals already engaged. This is said to inform the stiff-neck decision of the regime to impose devotees who will do the bidding in the coming elections in the South West, elements that, for instance, will accept cattle colonies and justify the most rash and self-consuming policies. The targets are Ekiti, Oyo and Osun, with Ogun and Ondo presumably in the hands of apologists. This dangerous plot is destined to repeat the scenario of 1964, when the same obnoxious Federal Government attempted to impose neophytes on Yorubaland, a stupid affront that snowballed into the civil war.

Secondly, the Yoruba face the brimstone of extremist herdsmen which the regime has openly ignored amidst allegations of complicity, through the proposed cattle colonies. There can be no greater threat to the Yoruba Nation than the attempt to take away the livelihood of the people. Herdsmen invasion has sent away hundreds of thousands of locals from their farmlands, fishers have avoided the rivers, natural streams and sacred forests are being destroyed, the green land, the rolling hills, the scintillating valleys, the gift of nature, the prairies, rare animal and plant species, the ancient domes and timber assets, the plain fields and the lurch green mountains are being set ablaze by the herdsmen with the most savage fury. The impact on biodiversity and the forest dependent health of local people is equivalent of eco-genocide. A million years ahead is being decimated and vanquished, in our very eyes. Not done, a terrible incidence was said to have taken place in Yoruba territory of Kogi. A trailer load of people from a core-North state came, armed with a letter purportedly written by an Emir instructing them to settle in a virgin forest reserve said to have been acquired several years ago by the Federal government. The letter was said to have been written in Hausa. The dangers are life-threatening as every herdsman roam the streets with weapons of war. The government claimed to have abandoned cattle colonies, but indications show the policy is being pursued covertly and with speed.

Who will the Yoruba vote for in 2019? With the floundering fortunes of the APC, the PDP is also a poisonous menu. The APC has failed to address the nectar that drew the Yoruba voters: Restructuring, but instead has used the theme as electoral bait fueling futile expectations. The Yoruba is also faced with leadership deficit. The Yoruba leadership lack an effective, coherent think-tan; educated but disorganized, intelligent but lousy, hard-working but naïve and destructively selfish as against an organized, sly, disciplined, less-talk, intelligent, swift and decisive Fulani class driven essentially by the interest of their own people. The people are toilworn but iron-cast, weary but hopeful, tired but resilient, frustrated and brimming with anger, not just against the system but against those who have failed to lead them effectively. For now, 2019 is just too far to wait as the economic and political hemorrhage of the Yoruba nation festers. What appears realistic is for the Yoruba to organize a democratic movement along regional lines. Alliances should be sought outside the South West bloc. It should be a political blitzkrieg. The new movement should coalesce into a formidable rainbow with the aim of defining the momentum before the next elections along the pathway of immediate restructuring of the country before the Presidential election. Any attempt to live on preposterous hope of voting for a candidate that will restructure the country in 2019 when same could be done now, is nothing but a reinforcement of a grand illusion.-Irohinoodua-The Pan Yoruba online