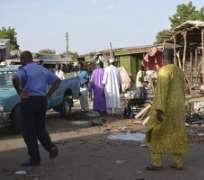 The Chairman, Borno State Emergency Management Agency. SEMA, Engineer Ahmed Satomi confirmed to newsmen on phone in Maiduguri in the night that "the attack actually took place and there were casualties when one of the suicide bomber attempted to gain entrance into the camp through the fence, in the process, he detonated his IED at the perimeter fencing of the camp killing himself."

"While the second suicide bomber gained entrance into the camp where he killed 3 persons and injured 39 persons."

" Those injured were taken to various hospitals within the city centre of Maiduguri for Medical attention, so far peace has been restored to the camp after the incident yesterday night", Ahmed added.

"As at 6.36 am this morning Thursday, a total casualties of 5 people were killed including the suicide bombers and 39 others injured', the SEMA Chairman said.