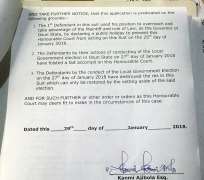 The Local Government (LG) parliamentary election conducted on Saturday, January 27, 2018 in Osun State is far from being over as a fresh motion was filed on Monday, January 29, 2018 by a human right activist, Barrister Kanmi Ajibola asking the court to nullify the poll in its entirety.

In the motion filed before Justice Kola Adegoke of the State High Court, Ilesa jurisdiction, Ajibola argued that the Saturday LG polls has to be set aside based on the intentional disregard to the court processes by the defendants in the case.

Besides, the lawyer in an 83-paragraph affidavit he deposed to in support of his motion also accused Governor Rauf Aregbesola of abuse of office, saying the two days public holiday declared by him was purposely to prevent the court from giving a bench ruling on the suit challenging the conduct of the elections.

Ajibola had sued the governor, the State House of Assembly, the State Independent Electoral Commission (OSSIEC), All Peoples Congress (APC), All Progressives Grand Alliance (APGA), Social Democratic Party (SDP) and eight other political parties and the case was adjourned to Thursday, January 25 but the two days holiday declared by Aregbesola prevented the court from sitting.

The suit against the conduct of the elections was filed by Ajibola on November 6, 2017.

In his written address, he explained that his application was predicated on three solid grounds, saying the 1st defendant “in this suit used his position to overreach and take advantage of the plaintiff and rule of law, as the Governor of Osun State, by declaring a public holiday to prevent this court to sit on this suit on the 25thday of January 2018.

“The defendants by their actions of conducting of the LG election have foisted a fait accompli on this court and have destroyed the res in this suit which can only be restored by the setting aside of the said election”, he stated.

He therefore sought for an order of this court to nullify the LG polls conducted “during the pendency of the suit” by the OSSIEC on the cooperation and participation of other defendants under the “State of Osun Local Government Area (Creation and administration) Law, 2015 and State of Osun Local Government Areas (Creation and administration) amendment (No. 1) Law 2017”.

In his affidavit, Ajibola contended that the “State of Osun Law” upon which the election was based and conducted cannot stand because on the 14th of December 2017, the State High Court in its judgment in Suit No. HIL/M47/2016, between himself and Governor of Osun State & 2 others had held that, “State of Osun” and “State of Osun House of Assembly” are not know to the constitution of the Federal Republic of Nigeria.

“I strongly believe that the Governor and the House of Assembly have turned Osun State to legal hammy and stagy setting, against the expressed and implied stipulation of the Constitution of the Federal Republic of Nigeria.

He added that “in a system where a governor has constituted himself to a legal island, giving himself the license to cause legislation against the spirit and intendment of the Nigerian Constitution, the Court of law will put a check to it”.