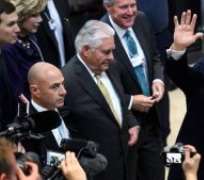 Davos Economic Forum attendees booed President  Donald Trump  at an appearance on Friday in which he criticized the media as “fake.”

Trump told world political and business leaders at the annual gathering in Switzerland that as a businessman, he received positive media coverage, but once he launched his presidential campaign in 2015, he realized that reporters were “nasty” and “fake,” eliciting boos from people in the audience.

“It wasn't until I became a politician that I realized how nasty, how mean, how vicious and how fake the press can be ― as the cameras start going off in the back,” Trump said. The president frequently makes the false claim that television cameras don't air his anti-media remarks.

Some reporters at the forum said some of booing came from foreign journalists.

Several delegates from Africa  had planned to protest  Trump's speech, in response to the president's  reported reference to Haiti and African countries as “shithole countries”  during a meeting with congressional leaders this month. It was unclear if that protest occurred, as some attendees needed to leave the speech before its conclusion.

Earlier in the day, Trump met with Rwanda President Paul Kagame, the head of the African Union, which criticized Trump's racist remarks.

According to reporters, Trump ignored questions about whether the two leaders discussed his comments.

Trump also dismissed reports in The New York Times and other outlets that he ordered the firing of Special Counsel Robert Mueller last summer, calling the reports “fake news.”