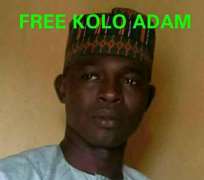 Once again we are at this same point, demanding freedom from persecution for expressing our thoughts.

Kolo Adam an aide to Modu Sheriff has been slammed in jail in Borno. His 'offense' was criticizing the Kashim Shettima government on the pace of rebuilding Borno, paying wages and increments with Paris funds, detaining protesting Borno IDPs and the like.

This is the latest in a now daily military and police crackdown including killing or detention of activists, journalists and youth at large. The militarized Nigerian state has become a North Korea of sorts with increased repression of free speech and detentions without charge.

Bring Back Our Girls advocates including former minister Oby Ezekwesili, Aisha Yesufu and others were recently similarly detained in Abuja without charge. Pro-Buhari campaigner, IG Wala is another ongoing case.

Borno author, Kolo Adam has been held since January 23rd without being taken to court. He was reportedly seen at the police station looking beaten up and stripped of his clothes. Pro-Shettima men wrote on his twitter page asking for his writing "desk" as condition for his freedom.

We call on all international bodies to press it on the Nigerian Federal and state governments to respect the rights of citizens to life and right to free speech as enshrined in the constitution and African charter on human rights.

Government officials who have themselves been involved in criticism of their predecessors must not be allowed to use the instruments of the state to kill and persecute others expressing their rights to free thought. The legal processes of charging to court must be applied and bails granted and respected as is the law.

We will not be silenced.

Nigeria will be freed from a reign of tyranny and reckless impunity.