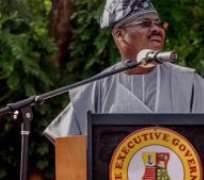 Oyo State Government has declared as “illegal” the three-day warning strike embarked upon by its workers and urged them to resume work immediately.

In a statement signed by the Secretary to the State Government, (SSG), Mr Olalekan Alli on Thursday, the governor threatened to effect no-work-no-pay rule on erring workers.

The government also denied as untrue the allegation of the labour leaders that it owed pensioners several months and retired primary school teachers 56 months of gratuities.

The striking workers had earlier accused the government of failing to address the 13 weeks old strike of the state-owned tertiary institutions, the sack of 256 members of staff of Ladoke Akintola University Teaching Hospital, Ogbomoso, lingering complaints of workers in the health sector as presented by the Joint Health Sector Union (JOHESU).

“The recent forensic audit reports on the tertiary institutions revealed a great deal of shortcomings such as inefficiencies, leakages, poor management, and other ineptitudes. Some institutions were even declared unsustainable and unviable. The consultant further recommended their closure. However, the recently constituted Governing Councils have been mandated to review their statuses and act suitably.

“Contrary to Labour's allegation, although Government on assumption of office in 2011, inherited Local Government Pension arrears totalling N4,736,741,934.49, it is on record that Government has disbursed pensions and gratuity of retired primary school teachers to the tune of N11,729,534,282.54.