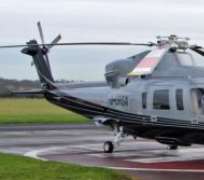 A helicopter suspected to be loaded with arms and ammunition was, last night, reported to have landed in a village called Jibu, located along River Benue, near Ibi, in Wukari local government area of Taraba state. Bala Dan-Abu, the senior special assistant to Governor Darius Ishaku on media and publicity, informed news men that the arms and ammunition were allegedly meant for a militia group that might have had plans to attack villages in the state.

Dan-Abu said, “This system of arms delivery was used prior to the tragic attacks in Agatu communities in Benue State last year, which led to the killings there. “When it was reported, nothing was done to trace and arrest the owners of the helicopter. That strategy works for them in Agatu and they are using it again today. This may be another planned militia attacks on the people of Taraba in the offing.”

Josiah Aji, representing Wukari II constituency in the state House of Assembly, told PUNCH correspondents on Sunday, January 21, that he was also alerted to the incident. Aji said he has since contacted the chairman of Wukari LGA, Hon. Daniel Adi, to be on the alert, while urging the security agencies to launch investigation into the allegation. Daniel Adi, the executive chairman of Wukari local government area, said he was still collecting reports from investigation on and that he has sent his surveillance team to the area and will disclosed details on the investigation soonest.

A resident of Jibu who asked to remain anonymous told news reporters that a helicopter had landed in the village in the night, but that the mission of the helicopter was yet unknown. “There was rumour recently that arms were being ferried across River Benue in the area to Banteje, a town along Wukari-Jalingo road, but I cannot confirm to you whether a helicopter landed in our village or not, because I have been in Wukari town for the past two days.”

Ahmed, a resident of Jibu, told newsmen that he was not aware of any helicopter landing in the village.

Ahmed noted: “If a helicopter landed here, it will not be hidden, given the noise associated with helicopters. Maybe I was asleep when when the helicopter landed.” Police public relations officer in the state, David Misal, dismissed the information as a “fake information” spread on social media.

Misal told news reporters that the police surveillance and intelligence team in the area has been ordered to investigate the truth of the matter.

While speaking to media correspondents, Misal said: “For now, the information remains a mere rumour, but we have our men there. As soon as we have further information about the issue, I will get back to you.”

NAIJ.com reported that Taraba state governor, Darius Ishaku, had dismissed the claims by the Miyetti Allah Cattle Breeders Association of Nigeria that his government was sponsoring a hate campaign against herdsmen and arming ethnic militias to kill them. The governor denied the claims in a statement sent to journalists by his special assistant on media and publicity, Bala Abu, on Sunday, January 14.