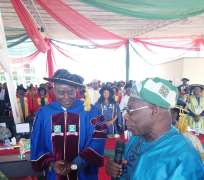 Former President of Nigeria Olusegun Obasanjo has bagged a Ph.D in Christian Theology at the National Open University of Nigeria (NOUN) and have surprisingly joined the call for the federal government to look into restructuring.

He made this known while presenting an award on behalf of the University to the guest lecturer Prof. Eghosa Osaghae Vice Chancellor of Igbinedion University, Okada, Edo State whose lecture was titled, "Restructuring and True Federalism" during the 7th Convocation lecture of the University.

His lecture took a cursory, in dept, and analytical perspective into the history of restructuring and its prospects in Nigeria.

The guest lecturer who is an erudite Professor of Comparative Politics had dissected the issues surrounding Restructuring and may have incontrovertibly convinced the former military president to look into restructuring.

It is worthy of note that President Obasanjo had remained one of the most prominent critics of restructuring as he had been quoted at different fora voicing his reservations about it, but in a swift contradiction to his publicly known position on restructuring backed calls for the federal government to give it a thought after Prof. Osaghae's lecture.

According to President Obasanjo who is the first Ph.D graduate of the University stated that even though he is yet to come to terms with the reality that he is now going to be addressed as Dr. Olusegun Obasanjo henceforth, he believes that the issue of restructuring should be looked into by the federal government.

NOUN Vice Chancellor, Prof. Abdalla Adamu said that Obasanjo’s enrolment and successful completion of the doctorate degree programme was an indication that no one is too old to pursue education and knowledge.

“It is also an encouragement for others to disregard and trash the idea of age, challenges and diligently pursue education for greater impact on the society.

The guest lecturer Prof Osaghae had lampooned the National Assembly for not acting as the true representatives of the people which had given rise to the increased agitations and the ultimate call for restructuring in the country today.

According to him, those who ought to direct the call for restructuring are members of the national assembly because they are the peoples’ representatives who were voted to represent the interest of the people and they could be regarded to have let the people down because they have not taken up this responsibility of driving the discuss of restructuring.

Prof. Osaghae also blamed the state governments for their role in diminishing the people. He said the failure of the state governments to have adequately utilized the resources given to them by the federal government led to the current call for restructuring, adding that had they been effective, many of the demands of the people would have been solved.

He argued that the state governments have very little to show for the funds received from the central government and this he claims predates this current administration.

“The state governments need to be a part of the restructuring, not just the debate. They must do things that reduce their dysfunctionalities. There is little governance in many of our states. There is very little transparency and accountability,” said Prof. Osaghae.

He blamed the political parties that produce the political leadership of the country as a unitary structured organ which is expected to produce a federal government at the centre which is almost impossible according to him.

He explained that units regarded as constituent units in Nigeria today were either imposed by the colonial administrators or a creation of the central government.

“The units that we regard as our constituent units in Nigeria today, have no organic existence, have no organic identities, they were imposed and that is what we are dealing with. So, when people call themselves northerners in Nigeria, they are really not saying anything. They are living up to a category that was defined for them by outsiders. When people call themselves easterners or westerners and southerners, we are products of artificial creations. Some of the ethnic groups are artificial."

We would recall that the debate on restructuring have continued to dominate discuss amongst various ethnic nationalities in the country prominent amongst them are the Ohaneze Ndigbo and the Afenifere the two Pan Socio-Political organisation from the South-East and the South-West of Nigeria respectively who met recently in Enugu where the famous 'Handshake Across The Niger' held to advance the discuss on restructuring Nigeria.