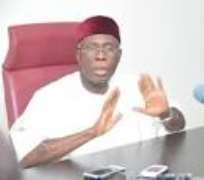 Nigeria wastes food worth $750bn yearly, experts prognosticate. Odimegwu Onwumereuncovers that despite this, millions of the population are dying due to hunger

ABUJA – The Minister of Agriculture and Rural Development, Chief Audu Ogbe stunned millions of starving Nigerians in a public presentation, when he said that 30% to 40% of the many foods produced in Nigeria are ultimately wasted.

It’s while colouring off the Nigeria Yam Export programme, Thursday, June 29, 2017, that Ogbe said, “We actually over produce food in Nigeria; 30% to 40% of some of the food we produce is wasted...”

Ogbe had an accomplice in the person of Youssef Zitouni, the Sales Manager, North West & Central Africa Refrigeration and Air Conditioning, Danfoss.

While unveiling the Danfoss Company in Nigeria, February 17 2016, held in Eko Hotel Convention Centre, Zitouni said that Nigeria’s food waste had hit $750 billion yearly. According to Zitouni, “80% food wasted in Nigeria, VS 33% in the world.”

Ogbe's statement was substantiated as disingenuous given that Nigeria was ranked very low by the Institute of Development Studies (UK), with the African Union’s New Partnership for Africa’s Development (NEPAD), January 26, 2017, as among African countries committed to ending hunger.

In the same year, a nutrition expert from the Federal Ministry of Health, Mrs. Ogunbunmi Omotayo whispered that the Nigeria Demographic and Health Survey, revealed: “Nigeria has the highest number of stunted children under the age of five in sub-Saharan Africa and second highest in the world with 37 per cent of all children stunted, 18 per cent wasting and 29 per cent underweight.”

On its website, the Institute of Development Studies highlighted that above 220 million Africans suffered from continual hunger and 58 million children under five years were undersized by under-nutrition; and Nigeria’s standard to stretched term national development policy, which is the Vision 20: 2020, chairs feeble importance on nutrition.

“Constitutional protection of the right to food is weak and social safety nets are basic and only cover few risks for a limited number of beneficiaries.”

News reports have it that in early January of that year, the Countrymeters.info said, "40.9 per cent of the population was aged below 15 while the 15-65 years bracket constituted 55.9 per cent and persons aged 65 and above accounted for 3.1 per cent.

Nigerians Cry Out They Are Hungry

Many Nigerians could not believe Ogbe. The Ekiti State Governor and Chairman of Peoples Democratic Party, PDP, Governors’ Forum, Mr. Ayodele Fayose on August 22 2017, challenged President Muhammadu Buhari, whom Ogbe serves in his cabinet and the ruling All Progressives Congress, APC, to give Nigerians the dividends of democracy, because people are very hungry of food.

In Fayose’s words, “APC should face governance squarely and give Nigerians democratic dividends because Nigerians are hungry.”

A former President of the Christian Association of Nigeria, Anthony Cardinal Okogie had said in a statement of June 14 2017, titled, “Deprivation and Agitation: A Reflection on Nigeria’s Late 2017 Budget” that Nigerians are hungry and angry.

“To say that the quality of life of the average Nigerian is low is to state the obvious... the extent of poverty experienced by our people is simply unacceptable,” said Okogie.

According to data, “Sunday Okoronkwo, a project manager at the Civil Society on Scaling Up Nutrition Nigeria (CS-SUNN), who represented the CS-SUNN project director, Mrs. Beatrice Eluaka, at a function organised by Media Centre Against Child Malnutrition (MeCAM), August 2017, lamented that the country’s $912m action plan on nutrition for 2014 through 2019 remains largely unfunded.”

Opposing to Ogbe��s remark, the United Nations (UN) had on May 24, 2017, warned, "Hundreds of thousands of Nigerians could starve to death in the famine-threatened North-East due to lack of aid funds."

The World Food Programme (WFP) exclaimed that over 5.2 million people were expected to be seriously affected by malnutrition by August last year, from the 4.7 million the WFP said were affected in North-East.

The United Nations International Children’s Emergency Funds (UNICEF) had in an estimation of 2016, cried out that the South-East geo-political zone of Nigeria had a number of 34, 889 malnourished children, while 6, 700 deaths were recorded.

Experts at Working to Improve Nutrition in Northern Nigeria (WINNN), exclaimed, "As a result of malnutrition, 58 per cent of children under five in Katsina, Kebbi, Jigawa, Yobe, and Zamfara States, suffer from stunting, meaning their physical and mental development have been impaired.”

In a rather swift u-turn, Ogbe while speaking at the convocation lecture of the Federal University of Agriculture, Abeokuta (FUNAAB) in October 2017, with the theme of the lecture dubbed “Food and the Future” said Nigeria would meet food necessities of the world soon.

Ogbe latter agreed that Nigerians were really hungry and needed food: “I see us achieving national food sufficiency in record time... I see us producing food for export, and increasingly meeting the food requirements of other parts of the world... in the years ahead.”

Ogbe had equally blamed Police, Army, Customs for high cost of food prices in the country, before the Senate and House of Representatives Joint Committee on Agriculture and Rural Development at the National Assembly, February 2017.

“The high cost of food is the daily unbearable extortions men of the Nigeria Police, their counterpart in the Army and Customs Service visited on truck drivers conveying farm produce from the hinterland to urban centres, under the guise of carrying out security checks.

“The situation on ground as far as high prices of food items are concerned is one of a dilemma to me...” he lamented.

Some Factors Against Food Surplus

Checks revealed that Ogbe in looking for a way to escape his lack-of-forethought, said, “The treaty on free movement of goods and services put in place by the Economic Community of West African States (ECOWAS) among member states, give room for movement of not less than 300,000 trucks of grains outside Nigeria on daily basis, which the ministry of agriculture cannot check.”

Yet, Nigerians are hungry, while Ogbe said the authorities exported 72 tonnes of Nigerian yams to UK, US in June 2017. And he believed the export won’t lead to food scarcity even as the “ministry of agriculture cannot check”?

According to him, “We shall flag off this export in three container loads containing 72 tonnes of Nigerian yams… because Ghana is targeting $4billion of yams in the next three years and if they can do that, we who are the masters of yam production have no business lagging behind. We don’t even consume all the yams we produce...”

Nigeria Has No Data On Food Waste

How Ogbe got his “30% to 40%” ratio of wasted food in Nigeria was imprecise to connoisseurs given that while celebrating the 2013 World Environmental Day, WED, at the University of Lagos with a public lecture hailed as “Think, Eat, Save”, the Society of Environmental Toxicology and Pollution Mitigation, SETPOM had bemoaned that by 2020, food waste generation may smack 126.2 million tonnes and 239.8 million tonnes of CO2 equal, whereas Nigeria had no available food waste data.

Gbolahan Solabi, as Executive Director/Chief Executive Officer of Rambigas Nigeria Limited who spoke on “From Farm to Table: Eating to save the Environment”, said, “While there are substantial available data on food losses/wastes at primary and secondary food production stages as well as their environmental implications, the same is not true for huge losses/wastes generated at the tertiary production level.”

Odimegwu Onwumere is an award-winning journalist based in Rivers State. He sent in this piece via: [email protected]