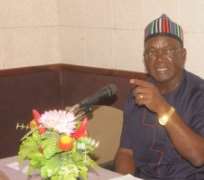 The Benue State Government has accused the Nigeria Police of speaking for the herdsmen whom it accused of perpetrating the killings in various communities across the state.

The Chief Press Secretary to Benue State Governor, Terver Akase, also accused the force of playing down the killings in the state.

Speaking on Channels Television Sunrise programme on Thursday, the CPS stated that silent killings were still going on in the state despite the presence of the Inspector-General of Police, and deployment of security operatives in the flashpoint.

Akase was reacting to the statement by the force spokesman, Jimoh Moshood , that the crisis was the result of two brothers killing each other.

He challenged the police to controvert his claims, noting that the perpetrators had been going from house to house and killing their victims silently.

The media aide asked the police to say the truth about the killings, insisting that the perpetrators were Fulani herdsmen whom he said had been declared in the 2015 Global Terrorism Index, as the third deadliest terrorist group in the world.

Akase said, “We are challenging the police, if they said killings are not going on, let them arrange their facts. This fact can't be waved aside. The police spokesman has positioned himself as a spokesman for the herders; he has tried to play down on the lives that have been lost in Benue.

“Unknown to him, the (police) command in Benue has confirmed the killings in Goma, Logo,and Lau. Let the police arrest the people behind the killings and parade them before the public. The Nigeria Police seem clueless or they are ignorant about what is happening in Benue State.”

He denied allegations by the police that the state government was arming militia groups, noting that Governor Samuel Ortom did not believe in unconventional security apparatus.

Akase explained that the governor relied only on the security agencies to contain the crisis in the state, stressing that Ortom had been calling on the military, the police and the Department of State Services to make more effort to unmask the masterminds of the attacks.

“They (police) are trying to rope in the Benue State Government, saying we are arming the militia. We want the world to know: Either they are trying to stand for the truth or they are complicit; Ortom is not an aggressive or violent person,” he contended.

The governor's spokesman insisted that his boss stood by his allegation that the attackers were camped in Tunga, Nasarawa State, adding that his apology to Governor Tanko Al-Makura of Nasarawa State was just to pacify him for going public with the allegation before discussing it privately with him.

Moshood, however, denied defending or speaking for the herdsmen, stating that he simply asked that the police be allowed to carry out their investigation without distraction.

He said, “I did not defend the herdsmen, I simply said that we should be allowed to carry out a thorough investigation into the incident. I think Akase was being mischievous for levelling such allegations against me and I demand an apology from him.”

Moshood had earlier asked politicians to stop distracting the police from their duties of investigating the killings, adding that the force was looking beyond the causes of the crisis in its investigations.

Moshood had said, “You know that there is a generalisation, if two brothers have decided to kill each other or two neighbours have issues, they would say it is herdsmen.

“This is the kind of situation you have where you have such a crisis. In Markudi two days ago, two communities decided to take the law into their own hands and the police quickly moved in. People tend to look at it from religious or tribal sentiments, which we disabuse their minds that a criminal is a criminal.”

Reacting to the 14 days ultimatum issued to the IG to fish out the perpetrators by the Senate, he stated that investigations had no limitations, stressing that the police were determined to apprehend the culprits.

“Politicians should allow us to do our job, the IG has relocated to Benue as directed by the President. There is no limitation to arresting of Miyetti Allah or any group that may be involved in the commission of these crimes,” he said.