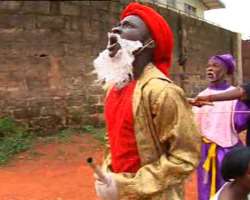 The last time any Ibadan, Oyo State-born comedian shook the scene was in the 1980s when Tajudeen Gbadamosi, better known as Jacob, led Jesters International to produce widely acclaimed comedy series, especially on TV. Unfortunately, the born-to-amuse Jacob died too soon, a tragedy that the group that comprised Papalolo and Aderupoko could not survive.

At present, the man in the news at the Yoruba grass roots humour world is neither Baba Suwe, Baba Ijesa nor Otolo. It is Ibadan-born Femi Ajewole (Alfa Sule), leader of Christ Vessel Drama Ministry, whose productions have, in recent times, turned many streets into a theatre of laughter. The four movies Alfa Sule has released - Oruko Nla, Take Heed, Pride and Amos 3/3 - have largely been a success.

Apart from the fact that what has turned out to be the in-thing for comedy freaks was conceived to be a soul-winning crusade, it is also interesting to note that Ajewole studied Electrical/Electronics (OND) at The Polytechnic, Ibadan. This he did after toddling through Methodist School 1, Oke-Ado, Ibadan; Baptist Secondary School, Oke-Ado, School of Science, Oke-Bola, in the Oyo State capital. He attributes the twist to 'God's plan' for him.

He explains, "When we started eight years ago, we were just about 10 members in the group. But now, we are over 40. By then, some adults despised and discouraged us thinking that we were not serious. But now, we give glory to God. At the initial stage, my parents did not believe in what we were doing but later they realised it was a divine call. An incident that convinced them happened when we were supposed to go and minister in a particular church and it rained that very night. We thought we could not go again and my parents had already concluded that they would not allow us to go anywhere only to be pleasantly shocked when the pastor of the church and his wife came to our house to pick us in their car for the show."

On the origin of the tag, Alfa Sule, he explains that it is a concept that originated from the group's maiden performance, where it featured a character called Alfa Sule, who played a role of a fake prophet. The character sunk into the audience's consciousness and they began to identify him by it. Some, however, also call them O ti gan pa, Niso nibe and other slang elements recurrent in their other productions.

Ajewole has had a running battle with some Muslims, who accuse him of deriding their faith by the choice of 'Alfa Sule'. Later, some of their Christian counterparts also challenged him on the direction that his works follow. He says he is not against any religion, but he has scores to settle with fake prophets.

"Nowadays, fake prophets in Christian and Islamic bodies are having a field day. People don't wait for God's calling. Since they can speak fluently in any religion, they will establish themselves and add to the predicaments of the people that consult them. All these vices should not continue like this and we thank God that the movies have been touching the lives of many people," Alfa Sule notes.