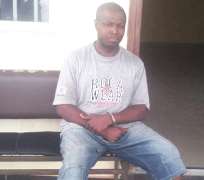 (Onitsha, Southeast Nigeria: 18th Jan 2018)-It is now 17 days after the ancestral home of the Elombah Family in Otolo, Nnewi, Anambra State was cordoned off and surrendered by over fifteen operatives of the Special Anti Robbery Squad (SARS) in the early morning or between 5am and 5.30am on the New Year Day of 1st January 2018; a nationally proclaimed public holiday or a day of the blue law when government offices and other public establishments are closed for businesses or official activities.

During the invasion, the entire Elombah family including their wives, children and the aging mother were held hostage, threatened and traumatized. The entire family house and all its rooms were also ransacked and thoroughly searched without warrant; after which valuable items including smart phones and laptops were made away with till date.

The invasion of the Family of the Elombahs on a national holiday was singlehandedly ordered and officially sealed by the Inspector General of Police, Alhaji Ibrahim Kpotum Idris; using the Federal SARS; a police department established for sole purpose of combating violent crimes of armed robbery and kidnapping. In the course of the ungodly and unconstitutional invasion, all adult male members of the Elombah Family; numbering six, were abducted; after which three were freed at the Awkuzu State SARS headquarters, Anambra State and three others, namely Daniel (UK based lawyer), Timothy (editor of Elombah online news) and Izuchukwu (a businessman trading in Niger State) were taken to the Federal SARS Headquarters at Abuja where Citizens Daniel and Izuchukwu Elombah were granted bail the next day; leaving Timothy detained without trial till date.

The criminal offence, written and known to Nigeria’s 1999 Constitution and criminal laws; warranting such violent invasion and use of excessive force was never disclosed to the Family at the point of the invasion or at the Akwuzu SARS headquarters where the abductees were briefly taken to before being moved to Abuja. The non-disclosure of the offence to the arrested or their family members or lawyers continued after more than two days.

The abductors later came up with allegation of offence of “criminal defamation against the person of IGP”; claiming that the Elombahs via Timothy wrote and published an online article against the IGP titled: “IGP Ibrahim Idris’s Unending Baggage of Controversies”. The article under quote, according to the abductees had nothing to do them or their news site. It was published in a number of news sites on 22nd December 2017 by one Ebiowei Dickson; who neither works for the Elombahs nor publishes on their news site. The link to the said article is here: https://politicsngr.com/2017/12/22/igp-ibrahim-idriss-unending-baggage-controversies/

As if this was not enough, the IGP, in a clear case of prosecutorial vindictiveness, refused to free and discharge the Elombahs with an apology and compensation; but went and secured, questionably, a seven days investigative remand order from Mpape Area Court in Abuja to further detain Citizen Tim Elombah. The seven days investigative remand order, secured on 2nd Jan 2018 has expired without renewal since 9th January 2018; yet Citizen Tim Elombah has been detained for nine more days without bail or trial; over an alleged misdemeanour offence carrying only maximum 3years imprisonment on conviction.

At the expiration of the seven days investigative remand order on 9th January 2018, the Family of Tim Elombah and his lawyers went to secure his release or observe his arraignment and trial in court, but were told by the authorities of Federal SARS, under the instruction of IGP that “he cannot be released but will remain with us until we tidy up his file to arraign and charge him for Cyber Stalking before an Abuja Federal High Court”.

When reminded by his lawyers of the expiration of the court remand order since 9th Jan and non-renewal of same or arraignment of their captive, the Federal SARS authorities told them to remember that “this is IG’s personal matter under whose order and instructions your brother is with us here until otherwise instructed or directed”.

As leaders of the Southeast Based Coalition of Human Rights & Good Governance Organizations, SBCHROs; among us are lawyers, criminologists, philosophers, political scientists and journalists, etc; the ordeal of the Elombahs in the hands of IGP and his anti armed robbery operatives and officers is a clear case of not only abuse of power and office; prohibited by Section 15 (5) of Nigeria’s 1999 Constitution, but also a total recourse to infamous Decrees 2 and 4 of 1984; which allowed the like of IGP to arrest and detain at will and outside the law or without trial; of any citizen even without any credible suspicion of commission of any offence.

Under the said Decrees, citizens were abducted, detained and tortured recklessly on guesswork or suspicion of simple offences as light as affray and common assault or identity or tribal hatred called racial profiling. Under the present central Government since June 2015, innocent and hated citizens are arrested even in their sleep and thrown into long detention before the commencement of any form of investigation. Cases of investigative guesswork, transfer of criminal responsibility and mistaken identity as well as indiscriminate arrest and treatment of citizens as violent criminals in criminal allegations strictly bordering on misdemeanours and simple offences or non-capital offences are also very rampant under the present Buhari Administration.

As publicly known, criminal offences in Nigeria are clearly defined and categorized by punishments or sentencing. The Nigeria’s 1999 Constitution in its Section 35 also clearly differentiates between capital offences and non-capital offences and processes and duration of their investigations. The Criminal Code Act further divides them into felony (capital and non-capital), misdemeanours and simple offences; providing for maximum of death/life imprisonment for capital felony and four years and below life imprisonment for non-capital felony; and maximum of three years for misdemeanour and maximum of six months for simple offences.

The ACJ Act of 2015 was enacted to ensure strict adherence to Section 35 (4) of the Constitution by ensuring that any person accused of committing capital offence and taken into custody for investigation is not detained ad infinitum or perpetually without trial or court bail. The Act strongly recommends for the use of court remand, cumulatively not exceeding 60 days in the case of a person detained without trial or administrative bail or 90 days if detained but granted temporary freedom and not yet charged to court.

That is to say that certain categories of criminal offence especially under non-capital felony, misdemeanour and simple offences such as white-collar crimes or offences of corruption and cyber crimes including so called “cyber stalking” and criminal defamation; do not require “investigative court remand”, not to talk of detention outside the law or without trial or that done via criminal processes of extra jus (beyond the law), extra legal (beyond what the written criminal law provides) and extra judicial (beyond court or judicial pronouncement or verdict).

For the avoidance of doubt, the so called federal offence of cyber stalking, legislatively enacted and presidentially assented in late May 2015 is clearly a non-capital offence, which falls under the category of misdemeanour; requiring 24hrs detention or no detention before investigation. The offence, too, does not require detention without trial or investigative detention with court remand. For an offence of criminal defamation or cyber stalking to be alleged against any citizen, the alleging/investigative authorities must have established some credible elements of linking evidence or the criminal act done. It requires more of actus reus (criminal act) and some elements of mens rea (guilty mind). That is to say that there are no rooms for guesswork, mistaken identity or transfer of criminal responsibility in offences of cyber stalking or criminal defamation.

Further, the Nigeria's cybercrime law is being used to muzzle the press and press freedom, which is inconsistent with Sections 22 and 39 of Nigeria’s 1999 Constitution. Otherwise called Cyber Stalking Act of 2015, the authorities in Nigeria have used the accusation of cyber stalking to harass and press charges against several bloggers and other media practitioners who criticized serving and retired public office holders through online and social media. The Cyber Stalking is widely seen as the modified version of Decree 4 or anti press freedom decree of 1984.

Under Section 24 of the so called Cyber Stalking Act, punishment on conviction carries a fine of up to 7 million naira (USD$22,000) and a maximum three-year jail term for “anyone convicted of knowingly sending an online message that he knows to be false, for the purpose of causing annoyance, inconvenience, danger, obstruction, insult, injury, criminal intimidation, enmity, hatred, ill will or needless anxiety to another". By the provisions of the Act, it is strictly a misdemeanour and not a capital offence. It only requires a maximum of 24hrs investigative detention and has nothing whatsoever to do with several days or weeks of court remand or unconstitutional detention without trial.

Having grossly breached his oaths of office and allegiance by allowing his personal interest and bias to override and impeach his public duties and powers; and by brazenly breaching and making mockery of the Constitution of the Federal Republic of Nigeria 1999, as amended; the Inspector General of Police, Alhaji Ibrahim Kpotum Idris has therefore overstayed his welcome as Nigeria’s Inspector General of Police. We call on the Presidency to remove him with immediate effect.

We demand for immediate and unconditional release of Citizen Timothy Elombah and release of all items confiscated and seized or possessed from the family members on 1st Jan 2018 including laptops, smart phones and seized travelling documents and total end to indiscriminate arrest, torture, intimidation, harassment and detention without trial of all members of journalism profession in Nigeria. For any of them that truly breaks the criminal laws of the land, due processes and provisions of the 1999 Constitution must be followed at all times.

The post administrative bail undertaking signed by the duo of Daniel and Izuchukwu Elombah at Federal SARS Headquarters making it mandatory for them to be reporting at Federal SARS at the beck and call of the investigating officers must be revoked and discontinued.

We also demand a duly written and signed apology from the IGP to be published in major print, visual and online dailies. The IGP must also publicly apologize for visiting the Elombahs and their families especially their children with crude and disproportionate force of arms through his special anti robbery operatives as if they are repeat-offender armed robbers.